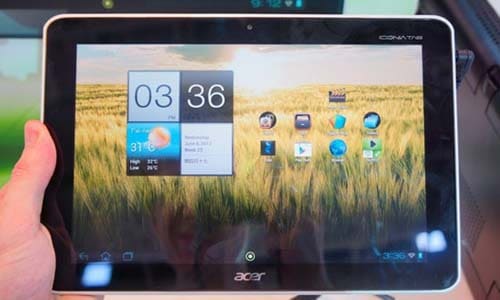 The Acer Iconia Tab A210 is a 10.1 inch tablet that the company introduced at the Computex trade show, and now it is on its way to a US debut. At least, that is implied by a stint at the FCC and it is listed right now on the FCC site.

As for the tablet, the Iconia Tab A210 will be seen holding the middle slot of the Iconia lineup from Acer. The tablet will have a 1280 x 800 pixel 10.1 inch display, along with the latest NVIDIA Tegra 3 quad core processor as its heart. The A210 comes with either 8 GB or 16 GB of internal memory, along with a front facing camera. It also has a microSD card slot, a USB 2.0 port, and 1 GB of RAM. The tablet will run Android 4.0 ICS right out of the box.

The Acer tablet range is headed by the A700, topping at a 1920 x 1200 pixel resolution, the highest to be seen on an Android tablet. Also, the A700 is the first tablet to go on sale with such a high resolution. The Iconia Tab range also includes the A510 model, which has similar specs to the A210 but features a higher resolution camera along with a few other goodies.

Acer surprised many by pricing the A700 at a competitive $450 and it will be really interesting to see how much less the A210 will be. We hope to learn that soon. Keep watching!