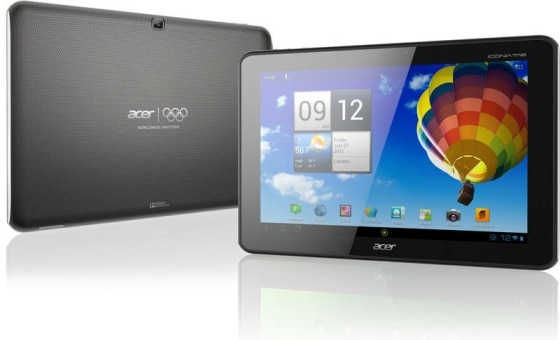 Acer’s latest tablet, the Iconia Tab A510, is now up for pre-order bookings in the US and Canada. The tablet is based on the NVIDIA Tegra 3 quad core processor, 1 GB of RAM, and has a 10 inch display that has a resolution of 1280 x 800 pixels.

Among the tablet’s features is an 85 degree viewing angle. It also has support for 1080p HD playback and runs Android 4.0 ICS. The tablet also has a micro HDMI output through which it can be connected to a TV or monitor. It also has a micro USB port along with the ability to belt out Dolby audio sound output.

For connectivity, the A510 comes with 802.11a/b/g/n Wi-Fi and Bluetooth. Applications that the device comes pre-loaded with include Acer’s very own Clear.fi application along with Polaris Office. The Cler.fi application gives the tablet capability to stream content to phones, other tablet PCs or other storage devices. As for the tablet’s battery back-up times, Acer is claiming it to be around 12 hours.

Prices start at $449.99 for the base version, which seems to be the special Olympic versions that Acer had launched a while ago.

“Our second-generation Acer A510 builds on the success of its award-winning predecessor with notable improvements in performance, responsiveness and ease-of use, elevating it to the status of ultimate mobile companion. Plus, the tablet will really surprise people with its comprehensive suite of productivity apps that will enable them to remain productive and connected on-the-go,” Paul Tayar, director of product marketing for connected devices, Acer America.

Catch up with the Press Release below for more on this:

SAN JOSE, Calif., March 22, 2012 – Acer America today debuts its first quad-core tablet in North America, the Acer Iconia Tab A510 with an NVIDIA Tegra 3 processor. It is designed to deliver outstanding performance and a visually rich experience for mobile game playing and entertainment such as enjoying video and lifestyle apps.

In addition, the new 10.1-inch tablet Acer Iconia Tab A510 goes beyond what most people expect of their tablets to enable heightened productivity. The new tablet comes with the full suite of Polaris™ Office 3.5, which is compatible with Microsoft Office and allows reading and editing of various document formats for mobile access to important information. The new Acer tablet also includes Acer Print, so customers have a convenient and seamless way to print wirelessly from their tablet.

“The new Acer Iconia Tab A510 will exceed the expectations of customers who are ready to embrace using their tablets for more fun, entertainment and a first-rate mobile gaming experience,” said Paul Tayar, director of product marketing for connected devices, Acer America. “Our second-generation Acer A510 builds on the success of its award-winning predecessor with notable improvements in performance, responsiveness and ease-of use, elevating it to the status of ultimate mobile companion. Plus, the tablet will really surprise people with its comprehensive suite of productivity apps that will enable them to remain productive and connected on-the-go.”

Ultimate Performance with NVIDIA Tegra™ 3 Quad Core Processor, Extended Battery Life
The Acer Iconia Tab A510 provides blazing speed and responsiveness powered by the NVIDIA Tegra™ 3 Mobile Processor and high-performance 12-Core GeForce NVIDIA GPU. This processor provides a unique Super 4-PLUS-1™ Quad Core CPU design with a fifth Battery Saver Core that allows up to four cores to be dedicated to demanding tasks such as watching video and playing the next generation of graphics-intense mobile games.

These four cores provide up to 2.6 times the performance and up to three times the graphics performance compared to previous generation processors, making the tablet incredibly responsive with life-like and crisp visuals for mobile entertainment and console-quality gaming on-the-go. The processor also provides up to four times faster web-browsing, smooth navigation, and hardware-accelerated support for Adobe Flash 11, which comes pre-installed on the tablet.

When the tablet takes on everyday tasks, the fifth Battery Saver Core becomes engaged in place of the other four cores, ultimately using less power and improving battery life. The 9800mAh battery, one of the highest capacity models in the industry, further improves battery life, so customers can enjoy their tablet for up to 12 hours(1) of video playback.

Productivity Suite, Printing, Make A510 Tablet a Mobile Workstation
The Acer A510 tablet is packed with a full suite of productivity apps optimized for use on a tablet that will give any road warrior a much needed boost. The anchor of the suite is Polaris™ Office 3.5, which provides customers a premium way to read and edit various popular documents while providing enhanced integration with other tablet apps. It also features Evernote, the easy-to-use personal assistant that keeps customers organized by allowing them to capture and save web pages, photos, ideas and documents and then store them to the cloud for access from other devices.

With Acer Print, customers can print wirelessly from the convenience of their Acer tablet, unlike some tablets that require confusing or costly apps that don’t support a wide range of printers. Acer Print is compatible with 87 percent of brand name printers on the current market. In addition to supporting a variety of printing formats (doc, pic and browsers), Acer Print also shows the exact print layout on the screen, no matter if it’s a spreadsheet for work or coupons for grocery shopping.

Additionally, the Acer A510 can be taken to a meeting to deliver a presentation; it supports HDMI to VGA for quick connection to projector.

Thrilling Extras for Entertainment, Connectivity
The Acer Iconia Tab A510 highlights lifelike and compelling 720p visuals thanks to the gorgeous 10.1-inch WXGA (1280×800 resolution) HD display. The Acer A510′s 16:10 aspect ratio and wide 85-degree viewing angle ensure an optimal viewing experience that is further improved by Dolby™ Mobile 3 audio. Plus, the display is a 10-point touch capacitive screen, so it delivers a remarkable degree of accuracy and responsiveness.

In addition, customers can share video stored on Acer Iconia Tab A510 with other devices via the tablet’s built-in micro HDMI port. Blu-ray™ quality 1080p video in 30fps can be streamed from the tablet to an external display. Plus, the micro USB 2.0 port enables quick content transfers to and from the tablet. Plus, the new tablet has been enhanced with the ability to conveniently charge it from its USB 2.0 port via another USB 2.0 device.

The Acer A510 is packed with features customers want in a tablet. Its 1GB of RAM(2) contributes to its fast mobile performance. The new tablet comes with an integrated 32GB of flash storage(2) for ample storage of photos, music and videos. The Acer A510 also has a Micro-SD card reader that supports up to 32GB Micro-SD cards(2) that can access additional digital content.

The Acer Iconia Tab A510 keeps consumers connected to Wi-Fi networks with reliable Acer 802.11a/b/g/n wireless technology. Plus, the integrated Bluetooth 2.1 + EDR (enhanced data rate) allows consumers to connect the tablet to a variety of other devices, such as headsets and printers.

The 1MP fixed-focused front-facing camera has an improved zoom, making it ideal for video conferencing. The 5MP rear-facing camera is auto-focusing, and provides the ability to take snapshots while recording HD video. Video clips and photos can be enhanced on the fly, stored and searched for based on various tags, and conveniently stored on Google+™.

The Acer Iconia Tab A510 is ready for hours of entertainment with popular pre-loaded apps such as Kindle™ for reading and Netflix™ for instant movie enjoyment. Google™ Music allows customers to create and enjoy their own personal playlists on their tablet. The preloaded Tegra Zone Android™ app brings customers direction to the best Android™ games that are optimized for NVIDIA Tegra powered tablets.

Intuitive Experience with Android™ 4.0 and Acer Ring, clear.fi
The Acer Iconia Tab A510 runs on Android™ 4.0 OS to deliver faster browsing, enhanced app and folder management options, more intuitive navigation, and a more polished design with enhanced holographic effects. Customers can easily customize their Acer tablet and will enjoy improved integration with Gmail™ email and calendar functions as well as improved multitasking and switching between tasks.

The Iconia Tab A510 features the unique interactive Acer Ring interface that can be customized to launch favorite apps, programs and websites. The Acer Ring one-touch button is always at the bottom of the display, so customers are always only a single touch away from what they care about most. It also features Screenshot, which can be used in any app to capture images of a web site, high score on a game, map and even a still from a video call.

Acer clear.fi is installed on the Acer Iconia Tab A510 to connect with any other DLNA-compliant device to quickly and easily share digital media. Clear.fi automatically connects all Acer devices on a network (smartphones, notebooks, desktops, HD media plays and storage devices) and gathers and organizes media files by type (video, music, photos, pre-recorded TV).

Olympic Edition Highlights Sleek, Usable Design
The Acer Iconia Tab A510 is a special Olympic Games Tablet Edition of the Acer Iconia Tab line. It features the Acer and Olympic logos on the chassis to celebrate the company’s sponsorship of the upcoming 2012 Olympic Games. The new tablet was designed with on-the-go usability in mind. The chassis’ soft-touch finish is comfortable to hold and buttons such as volume and screen lock are well-placed. It easily fits in a purse, briefcase or book bag, as it measures only 10.2(w) x 6.9(d) x 0.43(h) inches and weighs just over 24 ounces.

Available in U.S. and Canada Starting at $449.99
The new Acer Iconia Tab A510 is available for pre-sale starting today at national electronics retailers in the United States and Canada at a manufacturer’s suggested retail price of $449.99 USD and CAD. The premiere models are the Acer A510-10s32 (silver) and Acer A510-10k32 (black).[/showhide]