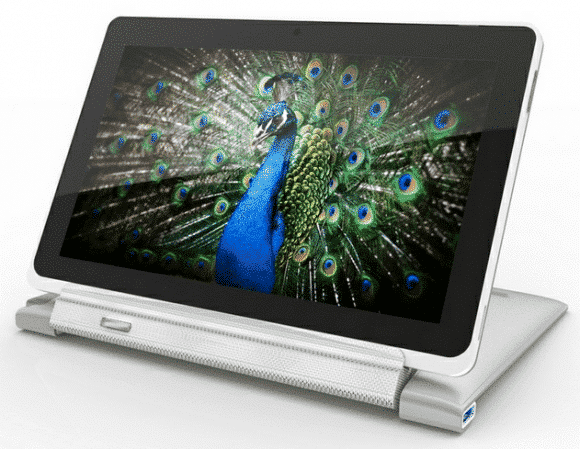 Acer has come up with two touchscreen Windows 8 based tablets, the Iconia W510 and Iconia W700, at the 2012 edition of Computex. The Iconia W700 is the larger of the two, being all of 11.6 inches and sporting a full HD 1920 x 1080 pixel display. The tablet is also paired with a desktop docking unit that holds the tablet securely.

The W700 tablet includes a USB 3.0 port while the docking station provides for three more USB 3.0 ports. This apart, the tablet itself plays host to a mini HDMI port as well as a Thunderbolt port. A unique aspect of the W700 is that it comes with the Dolby Home Theater integrated in it. As for battery life, Acer is claiming it to be around 8 hours for the tablet that has a brushed metal finish to it and is quite sturdy.

The other Acer tablet, the W510 is more of a Transformer type device with a separate keypad unit to which the 10.1 inch tablet can dock into. However, a unique feature of the W510 tablet is that it can be rotated by 295 degrees, providing the tablet with immense flexibility. Also, the tablet includes an USB 2.0 port along with a microUSB and a microSD. Then there is a SIM card slot as well as Dolby Home Theater hardware and software built into it. Coming to battery life, while the tablet is capable of 8 hours, the keypad dock pitches in to make it a commendable 18 hours.

Further details on both like price or availability are yet awaited.

Meanwhile, in another development, Acer has expressed its dissatisfaction for the Windows 8 version for ARM devices named Windows RT saying its still not fit enough to be deployed in a tablet device.

“According to engineer studies, unless we go into ARM 64-bit, otherwise performance is still not so great. ARM is a newcomer, young and attractive but it takes some time,” said Acer chairman Zhentang “J.T.” Wang.

via netbooknews, via reuters