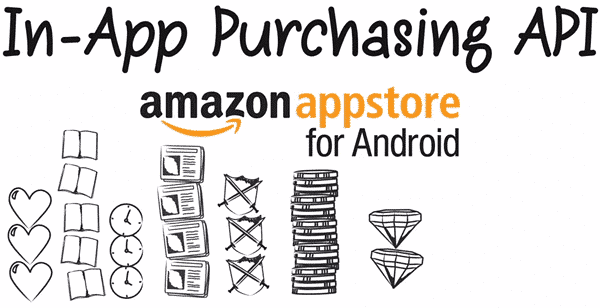 Amazon has followed suit from popular ecosystems like Google Play and iOS with the ability to buy things within an app. Starting today, developers will be able to add in-app purchases such as virtual currency, expansion packs, or take out subscriptions. This is not just applicable to the Amazon Kindle Fire but all apps available on the Amazon Android App store.

The ability to purchase content within an application is something that has been strangely absent from Amazon’s Android App Store. This is all changing as the company is rolling out a new API for developers to use to make this happen. Conde Nast, Disney, and other vendors have already augmented their apps for this new feature and other major companies are jumping on-board.

[showhide type=’pressrelease’] SEATTLE–(BUSINESS WIRE)–Apr. 10, 2012– (NASDAQ:AMZN) – Amazon.com, Inc. today announced an In-App Purchasing (IAP) service, making it easy for Amazon Appstore developers to offer digital content and subscriptions for purchase within apps and games that are available on millions of Kindle Fires and other Android devices.

“We found that by offering a product with IAP, rather than other monetization types, our conversion rates went up, as did our revenue, on a per-title basis,” said Larissa McCleary, Director of Marketing at G5 Entertainment, Inc., creator of Virtual City Playground and Mahjong Artifacts. “Although our experience on Amazon has always been great, we are thrilled now that IAP is available.”

“Amazon’s In-App Purchasing solution created a great way for us to reduce friction and drive more revenue from our games, as millions of people already have Amazon accounts,” said Michael Ritter, Senior Vice President Licensing & Distribution at Social Gaming Network, maker of Warp Rush, Dress Up Fashion, Bird’s the Word, and Night of the Living Dead Defense. “Kindle Fire already has a well-integrated store front and marketplace to distribute mobile games. By enabling in-app purchases we are able to be more flexible in pricing. We can release free games, provide updates and enhancements, and continue to monetize.”

“With Amazon’s impressive track record and tremendous success with the Kindle, we knew the Appstore would be a hit, so we signed up right away. And when we heard that Amazon was launching the SDK with In-App Purchasing, it was a no-brainer for us to integrate,” said Perry Tam, CEO and Co-Founder at Storm8, producer of games such as Restaurant Story, Bakery Story, Farm Story, Fashion Story. “Our experience with the Amazon Appstore has been great. We were thrilled when they decided to add In-App Purchasing support to their SDK, and the Amazon team worked closely with us throughout the beta test for this feature. Our games quickly gained traction on the platform; all of the Storm8 apps hit the Appstore’s Top 10 list within a week of launching.”

“By integrating In-App Purchasing, our goal was to offer Amazon’s frictionless purchasing experience to our customers. This includes the ability for customers to easily subscribe using 1-Click, take advantage of a 14-day free trial, and to auto-renew,” said David Rozzi, Director of Digital Projects at New York Post. “We’re excited about the results so far, and we look forward to continuing to provide content to customers on Kindle Fire and other Android devices.”

“Implementing the Amazon Appstore for Android In-App Purchasing solution was a piece of cake. We were able to turn it around and get it into internal testing within a few days’ time,” said Sean Thompson, Vice President of Production, Mobile Deluxe. “The documentation was top notch and the SDK contained everything we needed to test the implementation.”

“The Amazon Appstore SDK made it easy for us to enable Digital Publishing Suite to support in-application purchasing of both single issues and subscriptions of digital magazines on Kindle Fire,” said Zeke Koch, Senior Director, Product Management, Digital Publishing at Adobe. “Amazon’s well-designed API and rapid support allowed us to help our enterprise publishing customers be first on the Fire.”