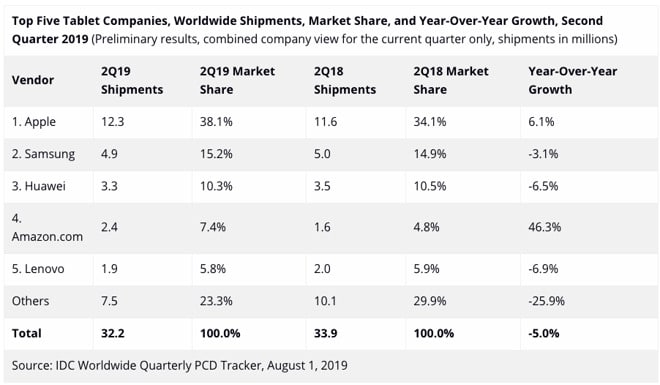 Many companies are abandoning tablets or have severely scaled back in the number of products they release on a yearly basis. Smartphones are increasingly becoming larger and this has resulted in many players losing money. The only two vendors that have saw any type of growth are Amazon and Apple.

The IDC has just issued a new report that looks at the Q2 2019 worldwide tablet shipments and also published new data on how it compares with 2018 and also their market share. They have proclaimed that the global tablet market saw a decline in shipments for the second quarter of 32.2 million units, resulting in an overall market decline of 5.0% year-on-year from 33.9 million units in 2018.

Samsung, Huawei and Lenovo all saw negative year on year sales. Samsung’s second-place market share of 15.2% increased, despite seeing shipments decline 3.1% year-on-year to 4.9 million units, most likely due to the rest of the market also seeing declines. Huawei saw its market share drop from 10.5% to 10.3% with shipments down 6.5% to 3.3 million units, while fifth-place Lenovo’s 5.8% share was due to a 25.9% year-on-year shipment drop to 7.5 million units. Amazon shipped the fewest tablets and their overall market share pales in comparison to all of the other companies involved in this space, but they did ship out 2.4 million Fire tablets and saw a staggering growth of 46%. Their market share has increased from 4.8% to 7.4%