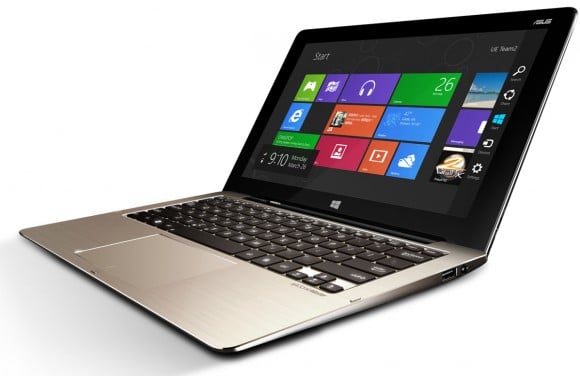 Asus today introduced a new line of Transformer device named the Transformer Book that not only sports better specs, but also bigger displays. To put it in another way, the Transformer Book is for those who’d like to have the goodness of both a tablet devices as well as a laptop or a notebook. The Transformer Book can also be termed as an ultrabook, the only difference being that with the display pulled off, it can transform into a tablet. Asus is describing the device as the “world’s first convertible notebook” and “is made for the seasoned user who enjoys the portability of a tablet for leisure but still prefers a more traditional Windows-based notebook when it comes to work.”

Screen size options for the Transformer Book include 11.6 inch, 13.3 inch, and 14 inch of 1920 x 1080 pixel IPS displays capable of accepting multi-touch inputs. Powering the device is the Intel Core i7 Ivy Bridge CPU with discrete graphics with 4 GB of DDR3 RAM to add some raw processing capabilities. Internal memory will be a combination of solid state and hard disk drives. The tablet also boasts of USB 3.0 support with the integration of ASUS SonicMaster audio speaker technology for better audio capabilities.
A 5 megapixel camera along the rear of the device with an HD webcam on the front pretty much round up the spec sheet.