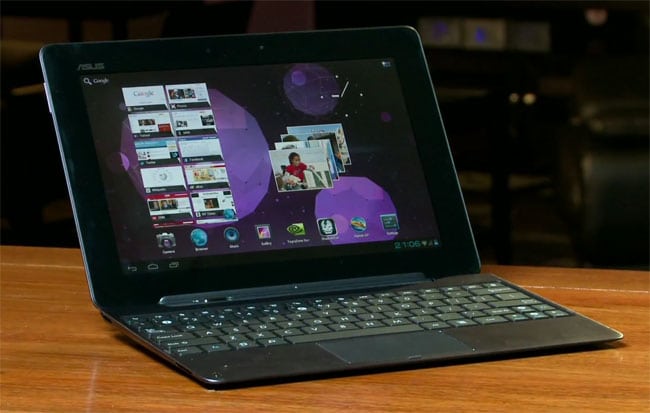 Asus had tasted reasonable success with the first generation Transformer. In fact, it has been among the better selling Android tablets though it never could get into a position from where it can pose a threat to the mighty iPad. However, while all of that is past (though the first gen Transformer continues to be available), the future is about the new Transformer Prime and Asus has done a fine job with the new tablet.

To begin with, the Transformer Prime continues the same form factor that had made the Transformer lineup so unique. Like apart from being a conventional tablet device, the Transformer created a niche of its own by also including a keyboard dock as part of the package. Also, the keypad had a battery unit of its own which, in conjugation with the same on the tablet ensured almost 15-16 hours of back-up time.

On the aesthetic side, the Transformer Prime shares the same design as the ZEN ultrabooks that Asus has come up with. Numerous concentric circles emanating from the company logo occupying pride of place at the center of the device radiate towards the tablet’s edge. This against a metallic colored background does add to the style factor significantly.

With just 8.3 mm in thickness, the Prime is also even more thin than the iPad 2 though at 586 gms, it’s a bit heavier than the Galaxy Tab 10.1. However, that’s the price to be paid for a device made of metal though the best thing is that it is lighter than the first gen Transformer. Once interlocked with the keypad, the Transformer Prime gets transformed instantly into a netbook and is ready for prime time action. For post this makeover, the Prime is ready to do battle with the netbooks and ultrabooks out there with total battery backup time is a thoroughly impressive 18 hours. Here the Prime is in a league of its own with no other netbooks /ultrabooks even coming close to it. Further, the docking and undocking process is simple and quick and once attached, the keypad does hold the tablet quite firmly.

However, that’s just what they say is the tip of the iceberg. For there is more to the Transformer Prime than meets the eye (pun intended). Like behind the beautifully crafted exteriors (coming to that later) lies the latest NVIDIA Tegra 3 quad core processor which is a step or two ahead of the Tegra 2 thing that we have heard of so much this year.  The quad core SoS has a clock speed of 1.3 GHz and has twice the number of CPU cores and three times the power to decode graphics files. Or to cut a long story short, The Prime is all about just amazing performance.

Working together with the Tegra 3 chipset is a 1 GB RAM though double of that would have made the Transformer Prime future proof. Right now, its Android 3.2 Honeycomb that runs the show on the Prime though Asus has promised the update to Android ICS is very much in the works and should be available towards the end of this month itself.

Coming to its features, the Prime takes digital photography with a tablet device to newer heights with a very capable 8 megapixel camera complete with LED flash built into its rear while on the front, it’s a rather low 1.2 megapixel unit for video chatting and self portraits. There is only one more tablet in the world to come fitted with a 8 megapixel camera – the HTC Jetstream — but that also costs 100 times more than the number of megapixels it boasts of and is also one reason why it is not making much noise. One can also shoot 1080p videos with the rear camera and the result is excellent. However, color reproduction with the Transformer Prime’s camera leaves a bit to be desired.

Up front, it’s a 10.1 inch IPS display that greets you, one that has a resolution of 1280 × 800 pixels and has been reinforced with Gorilla glass. So while the Gorilla in the glass will ensure the display is resistant to some level of harsh treatment, what might not be to the liking to Transformer Prime fans is the fact that the smaller and much cheaper Kindle Fire has more pixel density.

Coming to the software side of the Transformer Prime, well here too it has got enough to surprise and impress. Like the Transformer Prime. It comes preloaded with all the necessary apps that you need to get started right away while a lot more is waiting to be downloaded from the Android Market. So if you’d like to play games or read e-books, the Prime can do it all and do it in style.

In the end, the one thing that is sure to be on the minds of a lot of people out there is whether the Transformer Prime is better than the iPad 2.

Chris Burns from Slashgear has this to say: “if you’re deciding between an iPad 2 and this device, you’re doing it wrong. Buy the one that feels better to you, and go with it. There’s no perfect test to decide between the two, it always comes down to personal preference if you ask me. If you’re deciding on which Android tablet to get, look no further. The rest of the Android slate world has been completely blown away.”

However, comparing the Prime with the iPad 2 might not be the best thing to do as the Apple tablet is on the last throes of life while a new iPad 3 is due anytime during the first half of 2012. So the real battle with the Transformer Prime might well be with the next version of the Apple tablet.

However, if anyone has any doubts of its ability as an Android tablet, it can be summed up in the words of Hubert Nguyen from Ubergizmo who said: “To put it simply, the ASUS Transformer Prime is easily the best Android tablet and is possibly the best tablet, period. It depends mainly on your own taste and usage model. By itself, the Transformer Prime is a superbly designed and powerful tablet with an excellent display, application processor and overall user experience. However, with the optional laptop dock, the Prime turns itself into an ultra-mobile productivity machine that can play HD video for 18hrs – try that with a laptop. This means that Asus customers won’t have to worry about battery life anymore.”

Consider this fact if you wish to know why the Transformer Prime is the best thing money can buy right now. For there is no other Android tablet at the moment that can hold a candle to the Prime and yet cost $500 and $600 for the 32 GB and 64 GB versions.