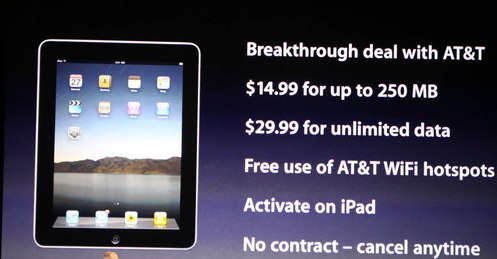 While the royal battle between the two US based carriers AT&T and Verizon is about to ‘get set and go’ on the 28th of October, there are already indications for interesting developments. In a move that many believe is a step to counter Samsung’s move to tap into the Enterprise sector, AT&T has also stated they would be all to happy to provide iPads directly to the enterprise segment. On offer will be all the six models of the iPad, and they are justifying the act by claiming the inclusion of the iPad in businesses would lead to further enhancement in productivity.

In fact, stuff doesn’t end here as there are also reports of AT&T willing to enter the lucrative application business and they plan to collaborate with companies to develop suitable applications. AT&T will also have in place special data plans to cater exclusively to business customers.

So with the iPad slowly being removed from its exclusivity, there is likely to be renewed surge of demand for the device. A smart move indeed that might unsettle competitors’ plans to eat into Apple’s tablet share. Apple has already beaten the competition once when it had launched the iPad while the most the competition could do was to make public grand plans of grand tablets of the future. And now, when such plans are entering fruition stage, Apple too has risen to the occasion by opening up the iPad. Let’s see if the latest move on part of Apple can see it through till they have the next gen iPads ready.