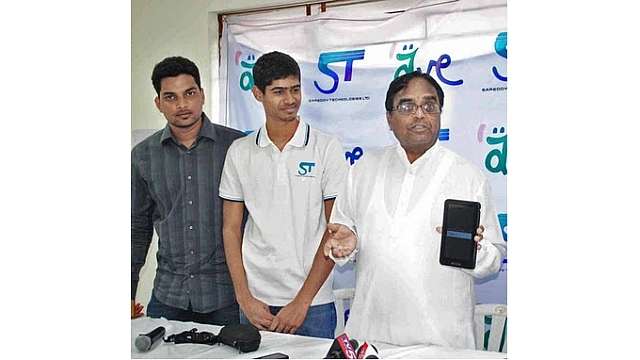 The Adam from Notion Ink has a new compatriot. However, its the Ave and not Eve. The similarity of the Ave with the Adam is that the like the latter, the Ave too have been built by students who are targetting the budget segment with the new device.

Packing in a 7 inch display and running Android 2.3 Gingerbread, the Ave tablet PC has been priced at RS. 12,999, a tempting price tag which has been the exclusive domain of the Reliance 3G Tab so far. Also, like its big name competitor, the Ave too boasts of 3G and Wi-Fi connectivity while battery life mentioned is a not-too-bad-but-could-have-been-better 6 hours.

A 1.2 GHz processor hums inside the Ave that comes with a 7 inch display while the tablet itself weighs an extremely convenient 360 grams. On board storage amounts to 8 GB while microSD cards of up to 32 GB will come in handy when more is needed.

“We are planning to sell 1,000 tablets in the first month. We are in talks with Reliance Digital and Bajaj Capital for offering financial schemes for students and others,” revealed Chiman Prakash Reddy, the Executive Director of ST or Sareddy Technologies Ltd. ST is registered in the UK that is also into developing mobile games. Prakash may not have any formal education but harbors a keen interest in IT and games development in particular. Assisting him in the project was Nikhil.

“As any other hardware firm, we get the boards in China and assemble them in the UK,” further added Prakash.

Incidentally, Hyderabad has gifted us several tablets before that has become famous on their own rights. Like we have had Adam with a pixel Qi display before followed by the Aakash that made headlines with a low price tag of just 3K.

Keep watching for more on this.