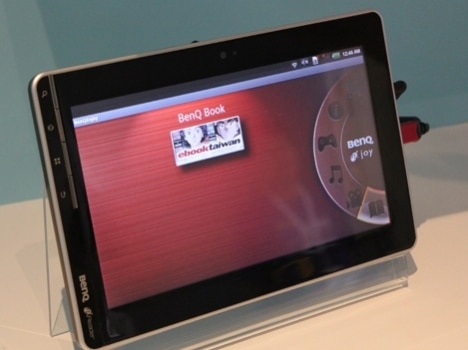 Popular electronics company BENQ is releasing a new Android 2.2 Tablet PC in the first quarter of 2011, featuring a new Samsung processor. We first reported on this new tablet during the last IFA in Berlin, and it was also at this event that BENQ showed off their new NReader electronic reader.

The new BENQ tablet features a 10.1 inch resistive touchscreen with a resolution of 1024×600. It has a 833 MHZ Samsung Processor running on Google Android 2.2. For connectivity you have Bluetooth; WI-FI to surf the internet and check email. You also have a HDMI and USB port. You have about 8 GB of internal memory to store your data and can enhance it further via an SD card. The battery life on this new tablet by BENQ is solid, with around 12 hours of constant usage.

Now what about content distribution you might ask? Earlier this year BENQ and Truedigital started a great new subscription model ebook store, you can check out our article on it HERE.

The BENQ R100 Tablet is due out in China and Asia in the first quarter of 2011, no word on pricing yet or if it will be available outside of those markets.