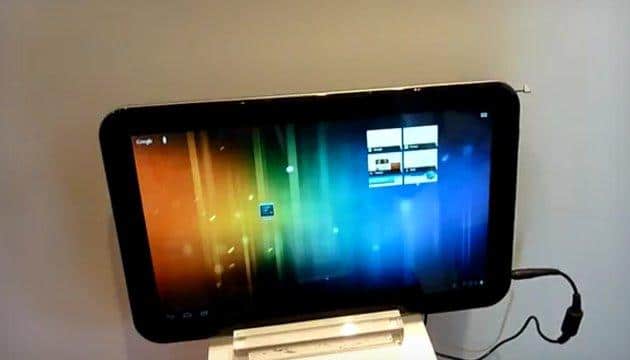 Remember the 13.3 inch tablet from Toshiba that we talked about a while ago? Well, it seems Toshiba is serious about it in spite of apprehensions from some quarters about a tablet that big being commercially viable. The tablet has been christened AT330 and was present for public introduction at the Toshiba World 2012 event held in Germany.

From the tablet’s features revealed during the event, the massive size (which pitches the AT330 almost in notebook territory) isn’t the only USP of the tablet. It’s one of the very few to come pre-installed with a TV tuner card, complete with a built in antenna of its own. The antenna is housed within the top bezel and can be pulled out for better receptions. The massive screen size (at least by tablet standards) will come in handy for watching TV programs, though it will also be interesting to see if the extra screen real estate can make for a better e-book reading experience.

Meanwhile, in other Toshiba tablet news, the company has launched a 7 inch budget tablet in Italy named LT170. Specifications of the tablet include a 1 GHz Freescale i.MX53 ARCM Cortex-A8 chip, 512 MB of RAM, and 8 GB of storage. The 7 inch display has a resolution of 1024 x 600 pixels with Android 2.3 Gingerbread as the OS. The LT170 will also have access to the Google Play store. The tablet is priced just 299 Euro, which can’t exactly be considered a bank breaking amount.