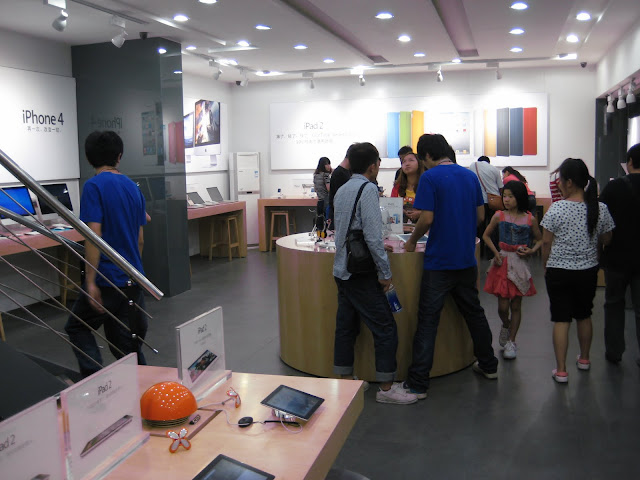 Chinese law enforcement agencies have said they are looking into the case of the fake Apple store that has come up in Kunming in China, probably prompted by the wide spread furore caused by the blatant copying of Apple business style that no doubt has taken the country’s counterfeit image to a new high. Its no secret, there are duplicates of almost everything that is manufactured in China, which is almost a separate industry operating parallel to the original.

Coming to the specific case of the fake store in Kunming, the owners have painstakingly copied every details to make sure unassuming visitors have no clue its not an original store they are visiting. Even the service guys donned the same blue hued t-shirts that can be seen in real Apple stores. The owner of the store at Kunming though justified by saying all that they sell are original Apple products at Apple prices, has already got a business license and is not doing anything illegal. In fact, he is even optimistic he will soon be elevated to the status of an authorized Apple dealer.

“I am sure we will become their authorized reseller in the near future,” the manager is reported to have said. “After all, we invested a lot in this store.”

Apple has 13 authorized third party stores in the southwest city of Kunming along with 4 official stores — two each in Beijing and Shanghai. The number of unauthorized resellers of Apple products in China though number in thousands. They would source the products from authorized Apple stores and resell them for a profit. This is not illegal since reselling Apple merchandise is not against the law.

However, the sky-high demand for the iPad 2 might force Apple to significantly expand its dealer network in that country. Meanwhile, result of the investigations are expected soon.

Well, the investigations has already yielded some results as there is news just coming in of at least two fake Apple stores being shut down. The reason provided is that the stores lacked the requisite business license to operate. Meanwhile, there seems some confusion as to the number of such fake Apple stores in Kunming with some sources claiming its 3 while some maintain the number could be 5. Its also not clear if the stores that has been shut down were found to be selling counterfeit products.  Meanwhile, Apple continues to maintain its silence over the entire episode.

via cnet, via electronista, via bbc