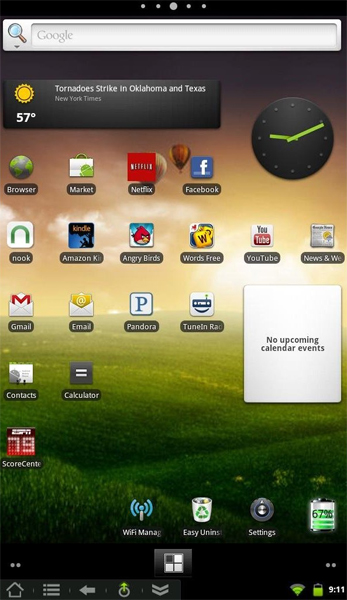 The Barnes and Noble Nook Color has been a tremendous success and many people are quite happy with the innovative features it brings to the table. Recent updates gives it the ability to play Adobe Flash content and even access the official Barnes and Noble Android Market to get new games. The Nook Color is an Android tablet but is skinned with a custom User Interface to give you a different Android Experience. Many people are keen to “Root” their device which gives you a high powered, lost cost tablet to turn  into a pure Android Device. This gives you the ability to install Kindle, Kobo or any other official Android application. Rooting is common and complex but a new company hopes to change it.

Nook2Android sells 8 GB or higher MicroSD cards for around $35 that have all the files needed to turn your Nook Color into a full fledged Android 2.3 Tablet. So what are the benefits of Rooting your Nook Color? First of all you can load in various Android markets such as the Amazon App Store, Getjar and others. We have a full list of Android Markets HERE.  You can also install any Android reader app you want like Kobo, Amazon, Txtr and more. You also are not limited to games or apps either, you can install whatever you want.

So what if you don’t want to change your Nook Color interface and love the device as is, but want to install apps? No worries, the company is offering a way to Dual Boot your Nook Color, so you can boot it into a full android mode and install whatever you want. You then have the freedom to boot your device normally and get the normal Nook Color Experience. This new method is great because it does not void your warranty.

You can do business with Nook2Android HERE.