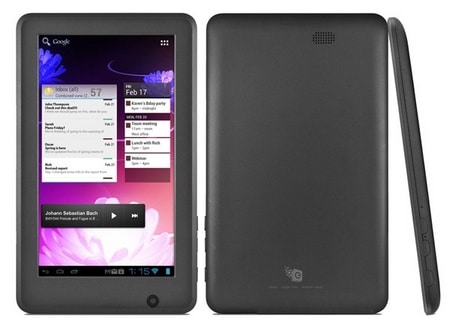 Another Tablet is on the horizon that promises to inflict the least damage to our wallets! The Ematic Glide 4 is a new budget tablet running Android 4.0 ICS. So while there is nothing spellbinding about its features and functions  the price factor for sure is one that would tip the scales in its favor.

The price one would have to cough out for the tablet is just $79.99. What you get in return is a 7 inch tablet device that has at its core a 1 GHz processor, 512 MB of RAM and an internal storage of 4 GB. One also gets a cloud storage capacity of 5 GB for the same price. The tablet comes with a microSD card slot to allow for more storage. Also, a nice aspect of the tablet is its voice record feature which allows one to record the proceedings of a meeting or a lecture. The latter could be particular interest to students as it will allow them to take down class lectures.

However, above everything else, it is the Ematic eGlide 4 tablet’s super affordable price tag that can be considered to be its biggest USP.