You are here: Home / Tablet PC News / Ciara VIBE ExoPC finally up for pre-order at the Microsoft Store 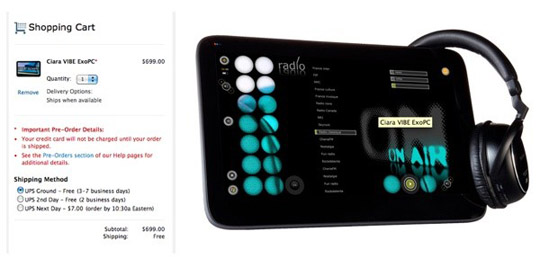 The ExoPC is probibly the quintessential Windows 7 tablet that everyone has been heralding as the savior of the Microsoft offerings in the tablet arena for this holiday season. Although late to the party, it looks like ExoPC has teamed up with the Microsoft Store for distribution for $699.00!

Although pre-orders are available right now, it looks like they will be shipping it very promptly. Starting December 20th they will begin shipping the units out to the lucky customers. Microsoft has also confirmed that the tablets will also be available at Microsoft retail stores.

So, are you wondering what your $699 will get you? Well, it’s a 11.6 inch tablet with a resolution of 1366 x 768 pixels. It has 64GB of flash storage, an Intel Atom N450 processor, 2GB of RAM, Windows 7 Home Premium with ExoPC‘s unique UI layer, and a front-facing 1.3 megapixel camera. Also, it has a mini HDMI port, USB port, MIC port, WIFI and 2 built-in 1.5-watt speakers with Realtek High Definition Audio.

If you want to check out the full list of tech specs or to pre-order it on the microsoft store, check it out HERE.