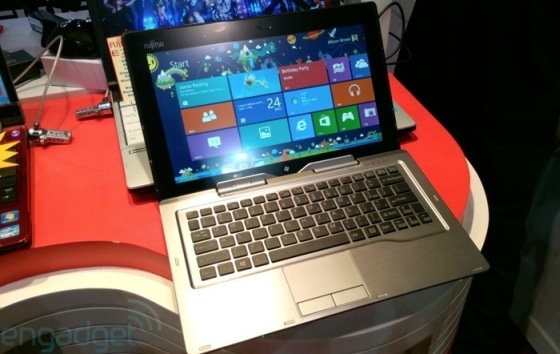 We all know Fujitsu is in the process of developing a convertible tablet running Windows 8 and not only has the device made its way past FCC but was also recently spotted at Hong Kong by Engadget. The Stylistic Q702 convertible tablet that also includes a dockable keypad features an Intel Core i5 Ivy Bridge processor with a 11.6 inch display on top of it. The tablet runs on 4 GB RAM along with a 250 GB solid state disk. There is also a fingerprint scanner integrated into the device, though it is a bit heavy when both the tablet and keypad is attached.

Also present in Hong Kong was the LifeBook T902 “Tercel” with a hardier build. The Tarcel has at its core a Core i7-3520M chip that works together with 8 GB of RAM, and 500 GB HDD. The Tracel also boasts of a Blu-Ray disk burner and is 4G capable. On-board is a 72Wh battery which has to support a bigger 13.3 inch display. More details are awaited.