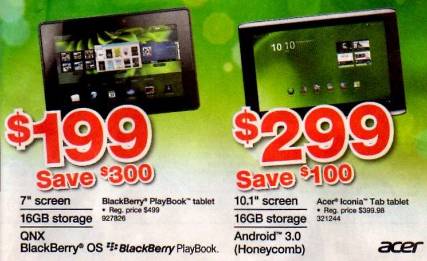 There are some cool Black Friday discounts to be availed of from Staples and the BlackBerry PlayBook features prominently among them. So the RIM tablet that had started out with a price tag of $499 can be picked up for just $199. The offer is valid only on Friday the 25th of November, from 6 in the morning till noon. Also, for that amount, what you get is the base version of the PlayBook with 16 GB of on-board storage. The same with 32 GB and 64 GB of storage will cost $249 and $399 respectively as part of Black Friday deals.

So its the base version of the PlayBook that is among the least priced and can make for a smart buy considering RIM is readying a major software update during early 2012 that promises to ease many of its glitches. Hopefully we will see native email and BBM applications built into the firmware and easy Android support.