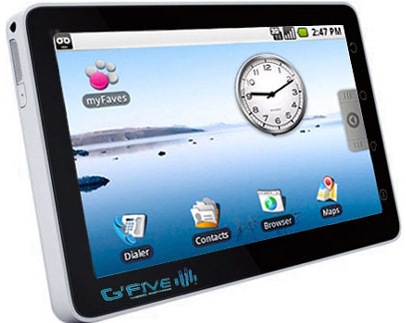 The budget tablet segment in India is all set to be bolstered with a new offering from the Chinese firm G’Five. Running on Android, the tablet will be priced below 10k so as to ensure maximum market penetration. The tablet should be ready for a launch within the month, G’Five sources revealed, though the company first stated they would be coming up with the tablet by June.

The Chinese firm has stated its intentions for increasing its consumer base in India. “G’Five is actively seeking more channel partners across the country, not just in metro cities but in tier II and tier III cities as well. Besides channel sales, G’Five is also in the process of tying up with retail operators especially the LFRs (large format retail stores) that have chain of stores across the country.”

They further added “… G’Five will launch its new and exciting range of 3G enabled Android and Windows based tablet computing devices in India priced below Rs 10,000, shattering the price barrier and taking the market by storm once again.”

Specifications of the upcoming tablet are a closely guarded secret as of now, though what seems certain is that a 7 inch capacitive touchscreen will make up the front of the tablet PC. One can however speculate that the gadget will be close to the Beetle device as far as features go, given the fact that both devices are priced at the same levels. The Beetel Magiq runs on a 1 GHz Qualcomm processor with Android 2.2 as the OS. For connectivity, the Magiq features 3G and WiFi.

In any case, G’Five will have to get its act together with the 7 inch tablet it plans to launch, given the intense competition the budget segment is currently facing.