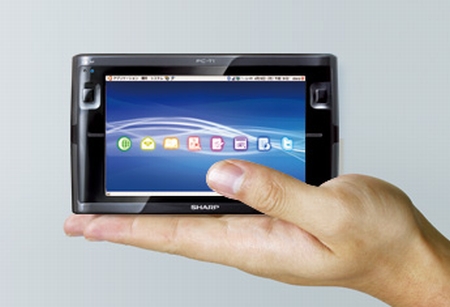 However, the PC-Z1 which ran on Ubuntu was a pretty incredible PDA, though it never did justice as a Netbook. And living up to our expectations, Sharp has decided to launch the Netwalker PC-T1 at the ongoing Computex, which is a step ahead of the usual Notebook creation, giving the public an opportunity to use an actual handheld device powered by Linux.

Comparisons are sure to be made made between the PC-T1 and the erstwhile PC-Z1. In that respect, what can be safely said of the PC-T1 is its no longer the hefty device that it once used to be. Rather, it actually is a well-built functioning slate PC which goes beyond the league of the plethora of MIDs made in China running on Android. The only thing about the PC-T1 is that the glossiness of the plastic seems rather second-rate in contrast to the matte finish of PC-Z1, which somehow looked much better built.

The lack of a stylus may surprise many even though Sharp came up with a customized Ubuntu to get an improved and user friendly UI. Though, if you search the box, you will find a stylus which is a little too big and is similar to DSi-XL. It is perfect to use with the PC-T1’s touch panel, but the only problem is carrying it around can be quite a nuisance since the device does not have a proper silo that we can keep away the stylus in.

Both these models are characterized by a matching CPU, screen as well as resolution and each function as good as the other or just as bad depending on what you consider of these handheld devices. Once you learn to accept the restrictions of this portable device, you will see that PC-T1 is notable enough to surpass the the ordinary MID quite comprehensively.

So specifications wise, the PC-T1 will have the 800MHz i.MX515 Freescale processor coupled to a 512MB of RAM along with 8GB of Internal Memory, though it can be stretched up to 16Gb by way of the Micro SDHC Card slot. It comes pre-installed with the open source Ubuntu 9.X operating system though what you will actually have with the PC-T1 slate is a Firefox browser that plays flash; a genuine Office Suite that comes with Open Office, a mail client, an IM application and other things that Ubuntu can function with including the normal Linux terminal and Gimp for the video player.

The screen continues to be the same 5 inch WSVGA touchscreen with a 1024 x 600 resolution, which translates to a good pixel density. There is built in support for Wi-Fi B/G. The PC-T1 weighs just 280g and measures a quite compact 150 x 90 x 18 – 21.3 mm. A 2300mAh battery provides power to the device which, the company says will be enough to keep things going for 6 hours, not that bad but more is always welcome like 8 or 10 hours would have been great. Apart from these, the PC-T1 also consists of a USB port and a USB host. So what this essentially means is that this opens the doors on pretty much everything that can be attached to the slate device. This includes the usual mouse or the keyboard, a 3G USB modem, GPS, a camera, an external HDD or maybe even your DVD recorder. And if that’s not enough, you can always fall back on PC-T1’s Bluetooth module and what you have in the end is a miniature computer at your disposal.

Even though PC-T1 will not be able to display the pictures taken from your camera as they should be, it however works well enough to handle the standard JPEG image files. And if you wish to look at DivX, all that you will be needed to do is just un-plug the PC-T1 video player . Users also gain access to Sharp’s e-bookstore with the PC-T1. So the slate PC will also allow its users to catch up with some reading.

In conclusion, if the PC-Z1 device can be termed as good then the PC-T1 is definitely better and a move in the right direction. But its still not the best as there’s still some room for improvement. Like it could have a better plastic quality along with more memory than just the 8GB at present, though the memory card manages to keep things at a respectable figure of 16GB. It can still be seen as a requirement for all those who don’t want to feel confined by the functions of an ordinary Smartphone. PC-T1 is the perfect addition to a normal Smartphone and people can do things on the move without having to carry a bulky Netbook with them.

Keep watching for more up to date tablet or e-reader news from the ongoing Computex Show .

Meanwhile, you can also avail of the monthly Good E-Reader Magazine, the June issue of which is already out.