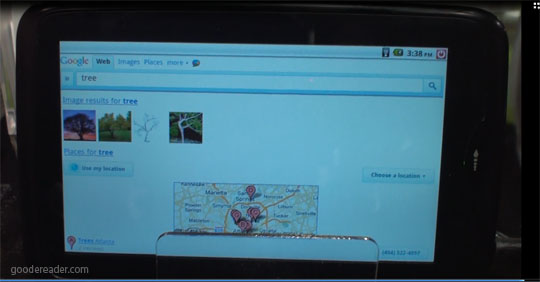 We at Good e-Reader continue our coverage of the CES in Las Vegas with the MiNew M-Pad by the Korean company Moneual. This company has been in buisiness for ten years, and is their first tablet computer offering.

The new MiNew M-Pad, which will hit the USA markets in the first quarter of 2011, is a 10 inch featuring Windows 7 based operating system. The screen supports multi-capacitive touch screen and the operating system seems to be a stock Windows based, which means there is no overlaying GUI to make interacting with Windows easier. We found through hands-on testing that clicking on the small icons can be a little bit difficult.

The processor of this new device is a Intel N455 1.66 GHZ and will come with two models for storage: 16 GB and 32 GB. If you find this amount of memory restrictive you can also enhance the memory up to 32 GB via the micro SD.

Finally for hardware it has 2 USB 2.0 ports, a mini VGA port, a headphone jack, and an external mono speaker. You can also connect up to the internet via WIFI, and it has bluetooth connectivity. The rep at the booth mentioned there was no plans for 3G or a Canadian launch at this time.

As we said, this is Moneual’s first tablet. They have been in business since 2001 and have won many awards for their green based technology, although this tablet does not really showcase any of their award winning technology. Some of the green tech that did catch our attention was their mobile air purification robot and intelligent robot vacuum.