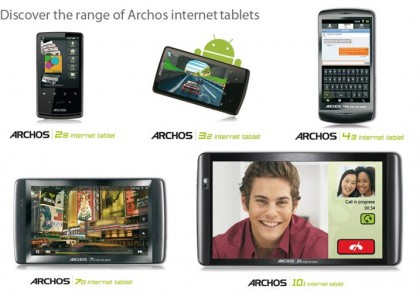 Remember the 5 Android tablets from Archos that we had discussed here before? Today, they have been officially announced at the IFA and they promise to undo many of the shortcomings that Archos’ earlier tablets have been accused of. In fact, it’s only the 5 inch Archos that found mass acceptance, though the same can’t be said of the other tablet offerings from Archos.

All the models are are ok alterntives, especially at the price, but they do have their drawbacks: Archos tablets have no access to the Android Marketplace, meaning you’ll need to shop through Archos’ own — and seriously limited — app store. Also, none of these tablets feature 3G, so we would recommend a different tablet if speed and apps are important to you.

Archos 28 and Archos 32 will be available by mid September while the remaining three tablets, that is Archos 43, 70 and 101, will make it to the retail scene by mid October.