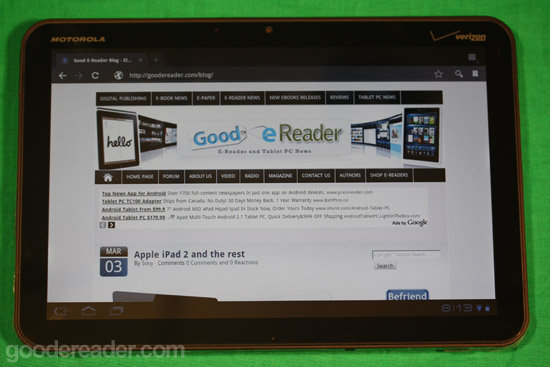 The Motorola Xoom is one of the slickest looking tablets we have gotten our hands on in the last four months and is the first tablet showing off Google 3.0 Honeycomb. Although the tech is very sound with its dual core processor and 1 GB of RAM, it is not without its problems.  The biggest issue right now facing the Xoom is the incompatibility with many of Adobe’s flagship products.

It has been known during the last few weeks that Adobe Flash is incompatible with the newest version of the new tablet friendly OS by Google. Adobe and Motorola has stated that they will release an upgrade for it sometime during the next few weeks.

One of the major problems with the Xoom so far in our testing labs is the fact that it does not have Adobe Reader. This application is one of the most popular PDF reading applications for the Android platform and is normally available via the Android Market. Adobe had their Adobe Reader available for Honeycomb for only a few days before it was pulled, citing “incompatbility” issues, which means you will have to do without it.

Not only is Adobe Reader not available, but the Xoom is also incompatible with Adobe Digital Editions. This means if you have bought eBooks from other companies that do not have an established Android application then you are out of luck getting it to work on your device. Of course if you do business with Amazon, Barnes and Noble, Borders, Kobo, or Sony, you do have a dedicated application you can install. None of these programs look very good on the Xoom though. Animated page turns are virtually nil and the eBooks application that comes bundled with the device does not allow you to side-load in your own collection of ebooks.

The absence of  major Adobe functionality with the Motorola Xoom which is a heavily promoted product makes it unfeasible for reading content that has Digital Rights Management. Unlike most tablets and e-readers that support Adobe Digital Editions or Adobe Reader, it is virtually impossible to really use this device to read store bought content from more independent sites.

Of course, if reading eBooks is your thing and you download unprotected books from the internet, you can install other Android third party readers such as Aldiko. Keep in mind if you do install this one it assumes your device’s internal memory is an “SD Card.” There is also a well known bug with the Xoom as well that it does not even have support for an SD Card.

So far, the Xoom for e-reading functionality is very weak, although the hardware itself is very good and feels very polished. It is just too bad that Adobe has been left out of the mix so far with its ability to integrate itself into a new operating system.