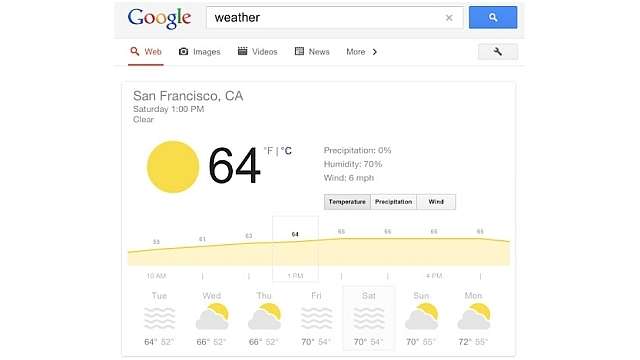 Come rain, hail or storm, you will now be better prepared than ever before. At least the latest Google’s dose of enhancement promises just such a thing. Typing weather on the search bar will unfold all that the weather gods have planned to unleash on us in the coming 10 days. A minor improvement it sure is but ever so useful. Also, the feature has always been available on smartphones though now tablets running Android as well as iOS has also been brought within its ambit.

The forecast will include details like temperature, precipitation, humidity and wind speed for the place from where the search has been initiated or for a different location if the relevant name or zip code is included in the search.

This is how Google described the new widget on Google+: “When you type [weather] into Google on your +tablet, you’ll see the current weather and you can scroll through the hourly and ten-day forecast. You can also toggle the Precipitation and Wind buttons to check out the percent chance of precipitation and wind direction/speed, respectively.”

Surely, the tablet toting crowd will be more weather conscious than before as they won’t have to revert to their smartphones each time they need advanced weather info. The weather widget for smartphones was launched just last year.