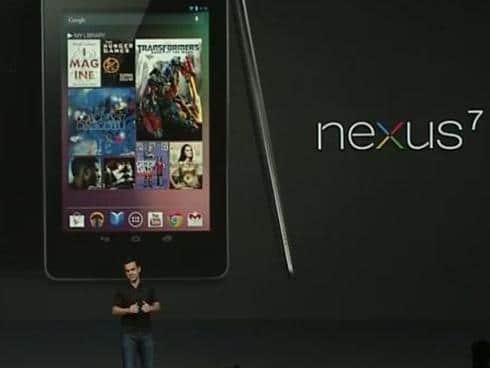 The Google Nexus Tablet has been one of the most talked about devices this year and marks the first time the big G is developing one themselves.  This device has certainly been worth the wait and gives you a tremendous bang for  your buck.

The Google Nexus Tablet features a 7 inch capacitive touchscreen display with a resolution of 1280×800. It uses Gorillia Glass provided by Corning, so  you know this will be a solid device that can take a beating and not break. Underneath the hood is a Nvidia Tegra 3 quad-core processor, running at 1.3 GHZ. It has an NFC chip, which should be a solid way for people to take advantage of all the new companies offering wireless ways to shop and compare prices. It also has Wifi, Bluetooth, GPS, but no 3g/4g connectivity. Finally, it does have a single camera on the front of the unit, giving you 1.3 MP. This will allow you to video chat with your friends, using programs like Skype.

The Nexus Tablet is set to drop at a very reasonable $199 for the 8 GB version or $249 for the 16 GB edition. It should be available via the Google Play store to purchase in the next few days.

I am super excited about this new tablet from Google! The price-point destroys its competition such as the Amazon Kindle Fire or Nook Tablet, in terms of hardware. This is a bare-bones tablet that will give you a pure Google Jellybean experience, with no bloatware. It really should take low-cost/high-performance tablets in a new direction and really give mid-range companies some stiff competition to beat for the remainder of the year.