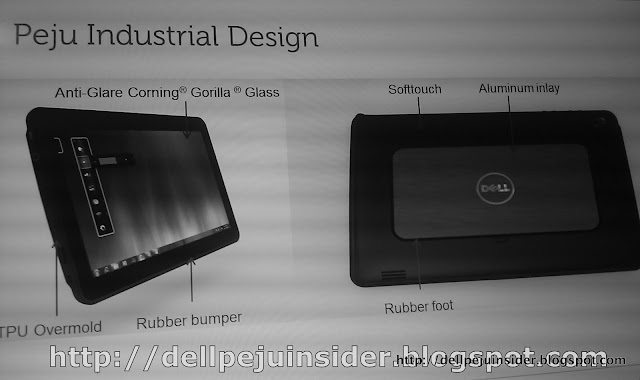 Dell is working on a 10 inch tablet running Windows 7 but is loathe to share all the details just yet. But then, thanks to some intuitive digging on part of those at Dell Peju Insider, we have a good glimpse of what the tablet is all about.

The specs revealed so far are impressive to say the least, what with an Intel Core i5 processor coupled to 4 GB of RAM making up the heart of the upcoming tablet. A 10.1 inch, 1920 x 1080 pixel display strengthened with Gorilla Glass make up the front of the tablet while the rest of the spec story comprise of a 1.3 and 5 megapixel cameras integrated into the front and rear, a 64 or 120 GB SSD internal memory, microSD slots along with 2 USB ports, a mini VGA port, HDMI slot, along with an audio and a SIM card slot.

On the connectivity front, the upcoming tablet will come with WiFi b/g, Bluetooth, 3G & 4G capabilities. The overall dimension of the tablet, as mentioned in the leak will be 10.8 x 6.7 x 0.63 inches while tipping the scales at 1.9 lbs. Also, battery life has been the bane of almost all tablets running Windows and to address the issue, Dell has included a 5,500 mAh unit which it claima will be good enough for 6 to 8 hours of operation on a single charge.

The leaks also show a separate docking station for the tablet with its own USB, HDMI, LAN, and audio ports. The tablet in itself will be compatible with both stylus and touch inputs.

However, there is no information of when the tablet would eventually be released or what it will cost. Till then, we only have to rely on what leak brings forth and hope they are true.