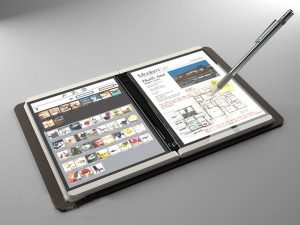 That Windows and Office remains the prime and foremost business focus for Microsoft was proved when they shelved their Courier tablet project just because it had possibilities of compromising with the business of two of their biggest software products. The Courier dual screened tablet from Microsoft happened to be one of the earliest high profile tablet projects to have been cancelled. It was sorely missed to say the least, this even when fan frenzy surrounding the original iPad was shooting through the roof during the same time that the Microsoft project was culled.

Whether this thinking of the Microsoft top echelons holds water or not is quite a debatable issue. The real reason, as it has now come to the fore nearly 18 months since the last we have heard of the Courier, is that Microsoft Chairman Bill Gates has not been too enthusiastic of the idea of a product from Microsoft that will not have many of the company’s own software such as Outlook and such. Courier project lead J Allard proposed using a stripped down version of Windows for the Courier to ensure it had good response times. What seems to have irked Gates is that users of the Courier will have to resort to a smartphone — apart from the regular PC — to catch up with email.

Clearly, a difference of opinion as to what Microsoft’s response should be to the fast emerging mobile computing segment that led to the untimely demise of the Courier. There were two schools of thoughts emerging — one led by Allard that proposed the launch of the Courier which could have meant a slot for the software bigwig in the tablet segment.

Another front was led by Steven Sinofsky, the head of Microsoft’s Windows division who was keen to see any product emerging from Microsoft to carry with it all the things that has come to identify Microsoft through the years. However, the earliest that he could deliver a full fledged Windows operating system that has been optimized for operation on a tablet like device was around 2012. As such, its no secret that it was Sinofsky who ultimately had his way so that what could have been the most innovative product in a lot of years got killed while still at its incubation. In fact, the Courier was just months away from a formal launch when it was cancelled.

However, with the tablet not having Windows as its OS in all its glory may have proved to be rather an achievement on the part of Microsoft instead of a sales adversary to it. This since it had generated a huge fan following while it was still at its prototype stages. For Allard, the Courier was way above than just another tablet like computing device meant for general purpose computing, watching movies, or listening to songs. For him, a Courier meant a device that was for content creation, one that would instantly allow an architect or an artist to pen down their ideas. Its also this that’s also the reason why the Courier may never have been a competitor to the iPad, apart from the fact that a market ready Courier was almost likely to cost more than the iPad.

But then, now that Windows 8 is slowly taking shape, there is also the possibility of Microsoft getting back into reckoning with their tablets and other such devices. All these are mere speculations for sure though the fact is, the time seems ripe to not only reopen the Courier project but to make it more comprehensive this time. Key areas to look out for if that ever happens include weight of the device, battery back-up time and cost apart from of course the performance and scope of the device itself. Dual screened tablets have never taken off in big way and reason for that is any combination of the above mentioned factors.