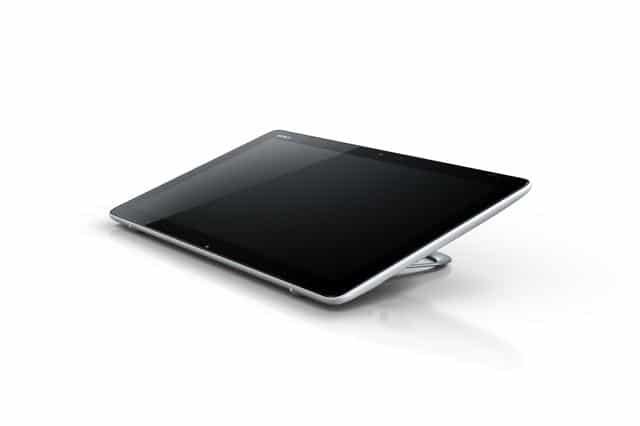 Big is beautiful should have been the design philosophy behind the VAIO Tap 20 that Sony has put up for public consumption at the ongoing IFA event. With a massive 20 inch (1600 × 900 pixel) display that responds to finger touch, the Tap 20 can be considered a cross between a tablet and a desktop PC. Surely such a device is in AIO territory, though what makes the Tap 20 better than most other AIO’s is that the Sony device has a better stand design that allows the device to be kept upright or laid flat on the desk. In an upright position and mated to a keyboard and mouse, the Tap 20 can be a desktop but when laid flat, the device will be a tablet device. The 10 point multi touch display can then cater to entertainment oriented activities like playing games or watching videos. Not to mention, the stand is heavy and tough enough to take a lot of abuse. In fact, shifting from desktop to tablet mode can be practically a workout.

Behind the massive display lies an Intel Core processor, which can either be i3, i5, or i7 with a system memory option of 4 to 8 GB. Internal storage will come in various options, though the highest is likely to be 1 TB. Intel HD 4000 graphics will take care of the heavy graphics files, though while the chip is capable enough, it may not be sufficient for high end games. However, lest you begin to think of it as another large tablet, the Tap 20 is all of 11 pounds, which is massive by tablet standards.

Windows 8 or Windows 8 Pro runs the entire show, though Sony has thrown in some of its own special flourishes. These include ClearAudio+, which is all about an enriching audio experience and a far cry from the puny speakers found on most tablet PCs or laptops. There also the OneTouch function which will allow the user to bond Tap 20 with any other Sony NFC products just by tapping them together.

The Tap 20 will be made available in some select countries by late October at an undisclosed price. However, there can be delays to that schedule as Sony reps also stated it’s still a work-in-progress status for the Tap 20 and the final product could end up being much slimmer and lighter.

[showhide type=’pressrelease’]Now everyone can share exciting media experiences with VAIOTM Tap 20 from Sony. It’s the fresh concept in home computing that’s a tabletop PC and so much more.

Versatile VAIOTM Tap 20 is designed to leverage the intuitive ease of Windows 8, opening up exciting new possibilities to interact with apps and your media collection.

Portable, battery-powered VAIOTM Tap 20 fits right into any living space – from bedrooms and kids’ play areas to the kitchen or garden. Lay it on a coffee table and let everyone join in games on the large multi-touch screen. Flip out the in-built stand and tilt VAIOTM Tap 20 at a comfortable angle for ‘lean back’ photo/movie editing by touch operation, browsing and entertainment. Or stand it upright and use as a fully-functioning desktop PC: it’s easy to work on documents, surf or check emails with the supplied wireless keyboard and mouse.

VAIOTM Tap 20 comes with a choice of apps that are optimised for the powerful multi-touch capabilities.

Family Paint lets two people draw, paint, sketch and daub simultaneously from opposite sides of the large multi-touch screen. Share the results at a touch on Facebook or Twitter. Fingertapps Organizer makes child’s play of keeping everyone’s agenda up to date. The friendly calendar view lets family members add sticky notes, scribble notes and see at a glance what everyone else is up to.

VAIOTM Tap 20 makes it easier than ever to connect with other home devices and share your content.

Through Sony’s One-touch* function, you can easily and instantaneously enjoy music and photos across an array of NFC (Near Field Communication) enabled Sony devices. Simply touch one device against another, and instantly establishing a wireless connection without the need for any Bluetooth or Wi-Fi set up. For example, it’s easy to continue listening to music stored on your VAIO through Bluetooth® headphones or speakers with One-touch function.

You can also enjoy full access to millions of songs and themed radio channels at any time via Sony Entertainment Network’s Music Unlimited service (in selected countries).

Expand your entertainment experience even further with three new apps by Sony that are available for free download.

The ‘Music’ application lets you enjoy your music collection with superb quality thanks to ClearAudio+ mode.

‘Socialife’ is a unique application that organizes your social and information world. View, sort and manage all your SNS and news feeds through one stylish user interface, alongside your friends’ feeds and posts. Mark interesting articles for later reading when you’re not so busy. Based on what your friends are reading, Socialife also points you to other popular topics and even suggests content that you might like.

The family-friendly VAIOTM Tap 20 touch PC from Sony is available from the end of October 2012 (in selected countries only).[/showhide]