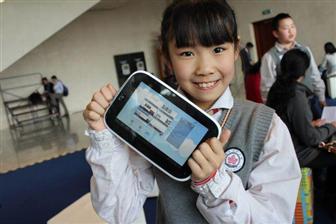 Intel has come up with a tablet device that is aimed primarily at the student community. The 7 inch tablet is built around the Intel Oak Trail Atom Z650 processor and dual boots both Windows 7 and the Android operating system. The capacitive touch screen display boasts of a 1,024 x 600, having an aspect ratio of 16:9. The tablet has a 1 GB RAM and will have on-board storage options of 4, 8, 16, and 32 GB. The tablet is encased in an outer protective covering will go on sale in the US for about $200 – $300 with shipments expected to pick up substantially in the second half of 2012. Taiwan-based Elitegroup Computer Systems and China-based Wanlida are the manufacturing partners of the tablet device.