No matter how mouth-watering the subsequent iterations of Android operating systems are named, the fact is that its chief nemesis, Apple iOS, always seems to be a few steps ahead. What should be even more disturbing for Android fans is that iOS is being projected to be the dominant operating system for the next 5 years as well. However, Android followers can still draw some solace from the fact that the gap with iOS will keep diminishing, though the final toppling act is not expected to take place before 2017. Of course, that does not mean Android will be the numero uno operating system once we are past 2017, but it’s just that Android does not seem to be able to do more that catch up steadily to Apple’s iOS in the next five years.  Also, while Android is poised to make some significant gains in the tablet sphere, the future does not look that much better for Windows. The best that we can see for Microsoft is the company playing catch up to both iOS and Android.

All of the above predictions are what DisplaySearch, a market research and consulting firm, have come up with when they set out to find out what  tablet PC architectures will be like in the coming years. They also predict tablet PCs are here to stay with shipments expected to rise to almost 330 million units in 2017, up from the 60 million units that is projected to ship in 2011. That Apple’s iPad will continue to be the biggest grosser among tablet PCs is all too evident. Seems Google has to make their Android platform even sweeter. 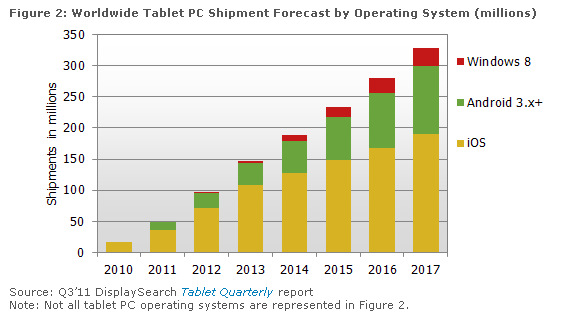