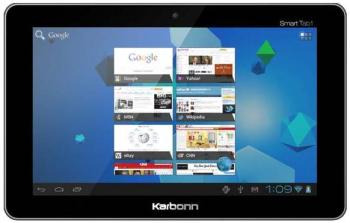 If you thought the cheapest (and perhaps the only) tablet running Android Jelly Bean right now is the Google Nexus 7, you are in for a nice surprise! The cheapest Jelly Bean title belongs to SmartTab 1, which has now hit store shelves in India and comes pre-loaded with the latest Android version. What’s more, all existing owners of the SmartTab 1 will be provided with the Jelly Bean update soon, possibly on the 2nd of August. That is all good news, though the real surprise is the tablet’s price, which at ₹6,999 translates to around $125.

However, price might be the only advantage that the SmartTab 1 enjoys over its more illustrious Google offering. The SmartTab 1 is powered by a rather low key 1.2GHz single core MIPS processor, while the Nexus 7 has a quad core Tegra 3 chipset. The SmartTab 1 will also have a slightly less capable battery unit rated at 3700mAh, which its makers claim will allow for 7-8 hours of operation. Compare this to the 4325mAh that powers the Nexus 7.

The SmartTab 1 is still expected to appeal to budget tablet seekers and is enough for light work.

[showhide type=’pressrelease’]Press Release goes in here. World’s Lowest-Cost Android(TM) 4.1 ‘Jelly Bean’ Tablet Shipping Now — It’s MIPS!
Karbonn Mobiles Now Shipping MIPS-Based(TM) Tablet in India
SUNNYVALE, Calif., Jul 31, 2012 (GlobeNewswire via COMTEX) — MIPS Technologies, Inc. MIPS -2.49% , a leading provider of industry-standard processor architectures and cores for home entertainment, networking, mobile and embedded applications, together with Ingenic Semiconductor, a leading China-based CPU provider for mobile multimedia applications, and Karbonn Mobiles, a leading mobile brand and provider of attractively priced multimedia phones in India, today announced availability in India of the world’s lowest-cost Android(TM) 4.1 ‘Jelly Bean’ tablet.
The Karbonn Smart Tab 1 tablet, which leverages the popular, ultra low-power MIPS-Based(TM) JZ4770 SoC from Ingenic, is available now to consumers in India. Priced at Rs. 6999 (approximately US$125), the tablet will be available via the Karbonn website, as well as numerous online portals and retail outlets in India such as Reliance Digital and Walmart.
The Karbonn Smart Tab 1 tablet was first introduced in early July with the Android 4.0 ‘Ice Cream Sandwich’ operating system. An upgrade to Android 4.1 will be available to customers who purchased this earlier version of the tablet.
According to a recent ABI Research study, the Indian media tablet market is estimated to grow with a CAGR of 71% from 2011 to 2017. “2012 is an important year for media tablets in India as an increasing number of models designed for the India market become available at different price tiers,” says mobile devices practice director Jeff Orr. “Keys to success for tablet vendors will be localized content, seamless connectivity, and providing an enhanced user experience.”
“With its unmatched combination of high performance and ultra-low power consumption, the MIPS-Based Ingenic SoC was a natural choice for our new tablet. Long battery life, leading-edge features and a wealth of local content make the Karbonn Smart Tab 1 tablet an ideal product for the Indian market. Building on our success with mobile handsets in India, Karbonn is pleased to be a leader in bringing an Android 4.1 tablet to market, and the first company in the world to offer an Android 4.1 tablet at such an affordable price point. We intend to be the leading marketer in the Indian tablet market wherein we wish to reach up to 200 thousand units per month by focusing on enterprise business solutions segmentation, education, healthcare, hospitality and next-generation business verticals,” said Pradeep Jain, managing director, Karbonn Mobiles.
“This new tablet demonstrates continued adoption of our cost-effective JZ4770 SoC in mobile devices. The JZ4770 SoC leverages the simplicity and elegance of the MIPS architecture, and features extremely low power consumption, 1.2GHz performance, and a high level of functional integration. Millions of tablets are already shipping around the globe based on our design, and we anticipate increasing success as more and more companies recognize the differentiation our solution can enable,” said Qiang Liu, chairman and CEO of Ingenic Semiconductor.
“After joining with Ingenic to announce the world’s first Android 4.0 ‘Ice Cream Sandwich’ tablet in December, we have achieved numerous additional tablet design wins. Working closely with Ingenic and its OEMs, we are seeing increasing success for the MIPS architecture in tablets, especially in emerging markets such as China, Indonesia and now India. With our deep expertise in Android development, we are able to quickly port new versions of Android to MIPS-Based devices, with speed that is second only to Google itself,” said Gideon Intrater, vice president of marketing, MIPS Technologies.
To learn more about the Karbonn Smart Tab 1 tablet, including features and availability, visit www.karbonnmobiles.com .[/showhide]