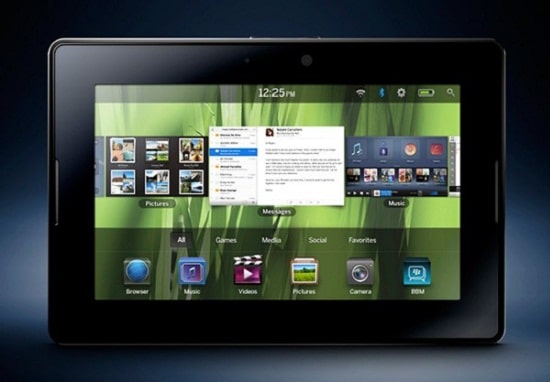 For those who have been holding on to their breath for the LTE version of the Blackberry PlayBook tablet, here is the best piece of news they can possibly have — the tablet seems all set to break on to the big scene on July 31st. The carrier RIM has teamed up with to support the tablet is Bell Canada. There would be other carriers as well offering their services to be compatible with the device, but that would be at a later date.

However, apart from the LTE bit, there is no real surprise on the specification front. The PlayBook is expected to be powered by a 1.5 GHz dual core processor though it is not yet clear if its going to be of TI OMAP make. A chip from Qualcomm with integrated LTE also cannot be ruled out. The OS for now will be PlayBook 2.0 though BlackBerry 10 will be pressed into service after it is launched, though that is not likely to happen before the first half of 2013. RAM strength is going to be 1 GB with the base version featuring a 32 GB internal memory. This rings true with the new strategy RIM had announced earlier wherein it had stated they would cease making 16 GB versions of the PlayBook. Further, the tablet will have a twin camera setup — a 3 and 5 megapixel unit at the front and rear. On the face of it lies a 7 inch display having a resolution of 1024 x 600 pixels.

As for the tablet’s price, the LTE enabled PlayBook will set one back by $549.99. That is not exactly cheap and it remains to be seen how many, apart from die hard RIM fans, vie for the tablet that does not really boast of a sparkling spec sheet. The price though applies to the UN-subsidized version and carriers will have to sweeten up the deal to ensure the tablet has enough takers. The 7 inch segment is currently ruled by the Nexus 7 and though its just a Wi-Fi only model, consumers aren’t complaining and the tablet is being picked up in droves.