You are here: Home / Tablet PC News / Many People Prefer to Watch TV on Their Tablets 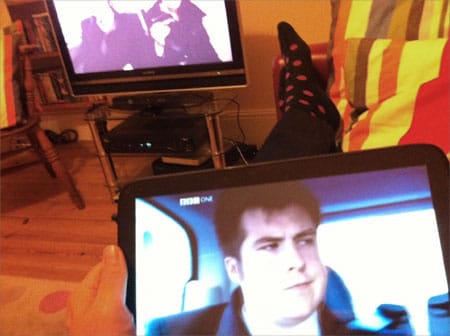 What are tablet owners up to with their tablet devices apart from playing games, checking e-mails, surfing the web, listening to music, and reading e-books? Watching TV of course! A Viacom report labeled “Tapping into Tabletomics” revealed that 15% of USA residents use a tablet computer like the iPad for viewing TV programs. The survey was carried out among a group of 2,500 people.

The desktop PC and smartphones have taken back seat as per the study report while tablet PCs have gone up in consumer preference for watching their favorite TV programs. The respondents however mentioned the tablet as just a secondary option to view TV programs. They still preferred the TV set as their first choice to view TV programs owing to the bigger screens and a better sound quality, while tablet devices only played a complimentary role.

Speaking of the consumer trend, Viacom stated, “Our audiences are some of the most deeply engaged and active across social platforms. Co-viewing apps create more meaningful ways to reach them and represent an entirely new level of engagement for fans of our content.”