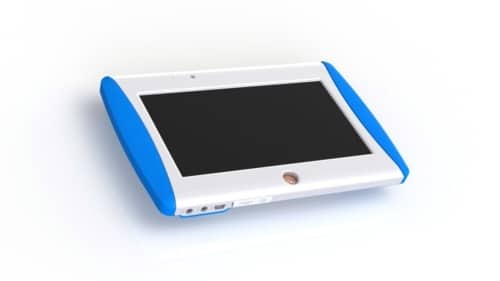 Parents eager to give a tablet device to their little loved ones now have one more option in the form of the Meep! tablet from Oregon Scientific. Also, with kids as its targeted clientele, it shouldn’t come as a surprise the Meep! has been provided with extra layers of protection to ensure the tablet survives the often harsh treatment that its users are sure to mete out to the device. Oregon Scientific, with its acumen in the field of personal electronics, is wise enough to provide the device with enhanced rubber silicon covering for added protection.

Internal specifications are being kept under wraps as of now, though the Meep! tablet will be unveiled during the TIA toy fair. However, what has been made public is that the tablet will have a 7 inch display and will run an unspecified version of Android. Further, the Meep! will connect to the internet via Wi-Fi and features g-sensor and an SD card slot. The company is claiming the tablet will be suitable for children aged 6 and above and will come pre-loaded with enough parental controls to let parents control what their children can access.

Oregon Scientific has stated the Meep! tablet would be ideal for listening to music, watching movies, or reading e-books. However, the makers haven’t revealed which apps will come with the tablet. The Good e-Reader App Store though can provide all the e-book and comic book reading apps that one might need.

NEW YORK, Feb. 10, 2012 /PRNewswire/ — Oregon Scientific, a leading designer and worldwide marketer of personal electronics, today announced its entry into a hot new category: kid’s tablets. Leaving cartridge-based devices behind in the dust, the new Wi-Fi enabled MEEP! tablet runs on the Android operating system and offers music, movies, e-books, and apps from leading developers – all on a large, 7-inch color touch screen! The MEEP! tablet will be unveiled for the first time at the Toy Industry Association’s (TIA) 109th American International Toy Fair this weekend.

Sharing a mobile device is a tough feat, especially for parents, when there is a risk it could be dropped, broken, scratched or rendered useless. The MEEP! tablet is an affordable fix for a tech –hungry generation of kids, featuring a tough design and an enhanced rubber silicon sleeve for added protection. Geared for children age 6 and up, the MEEP! tablet is Wi-Fi enabled, allowing access to a sea of web content that can be downloaded to its internal memory or SD card and viewed from any angle courtesy of the tablet’s internal G-Sensor. All websites and content can be monitored through intuitive parental controls that are adjusted remotely on any computer or mobile device with a browser and an Internet connection.

The MEEP! tablet from Oregon Scientific will feature a variety of accessories sold separately, including musical instruments.[/showhide]