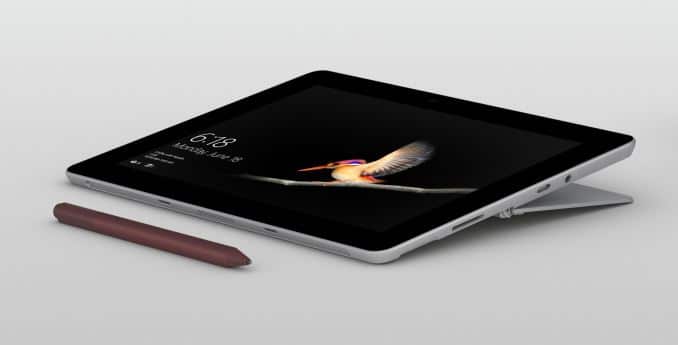 Microsoft has just announced the Surface Go tablet for $399 which is going to compete against the entry level Apple iPad, which currently retails for $329.

The Surface Go basically looks like a smaller version of the Surface Pro 3. This device is going to have a 3:2 aspect ratio display and a resolution of 1800 x 1200. Underneath the hood is an Intel Pentium Gold 4415Y processor with either 4 or 8GB of RAM and 64 or 128GB of storage. The processor is a dual-core seventh-generation model, which Microsoft says was chosen because of its balance between performance, battery life, and thermal properties that allow for a thin, fanless design. The company says the Go has up to nine hours of battery life as a result.

The Go will run Windows 10 with S mode enabled, which means you can only install apps from the Microsoft App Store. You will be able to upgrade to a full version of Windows 10 Home for free, if you want a full desktop experience, but you likely will sacrifice battery life.

The Surface is bundled with their signature built-in kickstand with unlimited positions, a front-facing camera with facial recognition login, and Microsoft’s proprietary Surface Connector port for charging and connecting to a desktop dock. Microsoft has added a USB-C 3.1 port, capable of charging the tablet or outputting video and data to external devices. It has also rounded the corners a bit compared to the latest Surface Pro, but overall, it’s the same familiar magnesium design Surface users have come to expect.