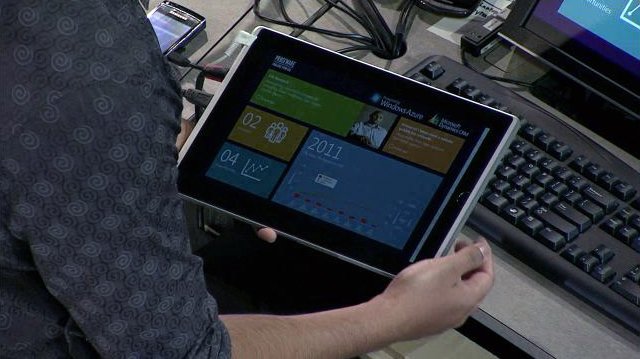 Microsoft’s first Windows version that will be optimized for touch operations – Windows 8 is not expected to be ready by the first quarter of 2012 though there already is a mysterious tablet concept that has emerged running the next iteration of Windows 7. The tablet was seen at the Microsoft Worldwide Partner Conference running an early version of Windows 8 though the UI sports a striking familiarity with the Windows 7 version that has been developed for use in smartphones.

Microsoft has however stated that its Windows 7 mobile operating system would never make it to tablet PCs and has stated in clear terms the Windows 8 is a whole new development that is being brought up purely for use in touchscreen based devices like tablet PCs.

Microsoft has also brought about a clear distinction about the way it views usage of tablet PCs in that the tablets running Windows 8 would have on offer the same functionality that we can expect out of desktop or laptop PCs. In that sense, tablets running Windows 8 can be considered will be a replacement for other conventional forms of computing and is a whole lot different from Apple’s tablet strategy of offer general computing facilities in their iPad range of tablets. Apple though have been exceptionally successful in its tablet venture so far. In fact, this makes it really interesting to see how Windows 8 fare in the light of the stupendous success that iOS has achieved in the iPad tablets.