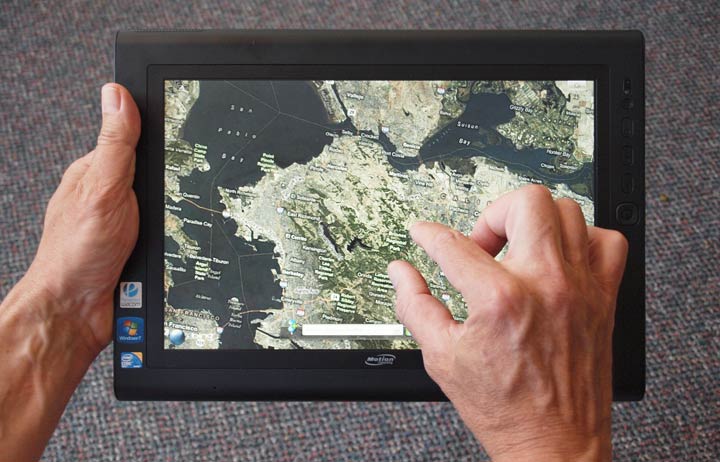 The J3500 tablet PC is the latest offering from the Austin, Texas based slate maker Motion Computing and one that promises to take the rough with the smooth. The new J3500 also comes loaded with features, showing such options as the Intel Ultimate-N WiFi and Wacom WXGA Touch, along with dual-core Intel Core i7 vPro. Then there’s a Pen Digitizer as well. The J3500 is a niche Tablet PC that assist as an aid to those in the fields of warehousing, healthcare, construction, the government or in any place where one needs to make use of a mobile computing device that is strong and sturdy.

The J3500 includes a 32-bit Windows 7 Professional functioning via an 1.2 GHz Intel Core i7 Duo processor, 4 GB of DDR3 memory and Windows 7 Dual Touch potential. The 12-inch screen has a bright display which is a stunner while the ultra-durable Corning Gorilla glass that it is made of ensures it is up to four times  resistant to breaking forces. There is a new ‘anti-smear’ coating as well that enhances visibility.

The screen is based on a new touchscreen technology that makes sure the screen is receptive to both touch or pen input with the new ‘Stylus recognition’ feature enabling users from switching between either of the input modes easily. An innovative ‘palm rejection technology’ too has found place in the scheme of things and helps to make out the intentional touches from the false ones. All of these ensures ease of operation with the tablet since enabled software applications can be dealt with just as easily with the fingers as the legacy programs that have smaller targets and requires the accuracy of pen input.

The built-in accelerometer will let the 1.8-inch, 160-GB hard drive of of the slightest disturbances or changes in orientation. There is a separate button that locks the whole system, and would require the finger print scanner in order to start it up again. The back portion is rubberized, which helps with a better grip support. Then there are other options such as the Gobi 2000 Mobile Broadband.

The J3500 is assembled around a magnesium framework that creates an air of invincibility around it, something that has helped the J3500 earn a NEMA ranking of IP52 which is indicative of its excellent dust or moisture resistant feature.

However, the good points earned with the respectable NEMA rankings is lost elsewhere. Not a shocker at all for an i7, the J3500 model tends to get heated up considerably. After being continuously used for two hours, the display radiated its hottest of 104 degrees, while some parts of the backside reached as high as 114 degrees. It took up 78 watts while functioning and charging. Considering it is equipped with an i7 system, the J3500 reflects a second-rate Geekbench tally of 3130.

An impressive feature of the device is its battery life, which survived for a continuous four hours, even with a video playing continuously during the entire duration, definitely not a bad deal for a system based on i7 which has power saving features turned off. Praise goes to the dual batteries which also explain the excess 4.25 pounds of weight. Bear in mind that there is no track pad, keyboard or optical disc drive. An undersized power brick and 30-inch “Mickey Mouse” (C-5) type AC cord add another nine ounces to the weight of this travel-sized device.

However, what failed to impress is the Windows 7 that fares poorly as an operating system for the tablet. Even though it has a dual-touch feature, the operating system still functions better with point-and-click operations.

The J3500 is intended for users such health care workers, inventory clerk or field operator. The J3500 Tablet PC is also specifically built with features that will make it the ideal device to be used by the government and enterprise.

The listed price for this model starts at $2,299. That’s the price of 4 or 5 iPads though the J3500 isn’t exactly made to be used in the same environment as the ipad. Rather, the J3500 is meant to be used in situation where none would like to carry their iPads. However, there’s still one area where the two maybe found sqaring up – the healthcare sector. Many hospitals has adopted the iPad for various tasks and it remains to be seen if the bigger and heavier J3500 can nudge out the far more delicate iPad.

Stay tuned for further developments or for the latest tablet pc or e-reader news.