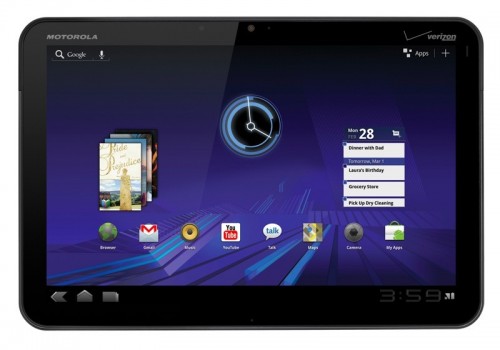 Good e-Reader is on the scene in Las Vegas where we will be reporting the entire 4 days of CES all of the latest Tablet PC’s and e-Readers. The 5th of January was devoted to mostly invite only press conferences where Motorola gave us a first glimpse of their new Google 3.0 Tablet PC named the Xoom.

The Motorola Xoom is going to be powered by a dual-core 1GHz Nvidia Tegra 2 chipset, Android 3.0 Honeycomb, 10.1-inch capacitive touchscreen with 1280 x 800 resolution, WiFi 802.11b/g/n, Bluetooth 2.1, 32GB of built-in memory, 5-megapixel camera on the back with 720p video recording. It will also have a front facing camera as well, for video conferencing. Its battery life will last around 10 hours of continual high usage and around 18 hours with WI_FI off and using the device as an e-reader.

Right out of the gates the Xoom will be using 3G but in the second quarter of 2011 it will be using Verizon 4G LTE support, which will kick things up a notch in terms of web browsing speed.

Most tablets to be unveiled at CES will only be running Android 2.1 or 2.2, the next iteration of Google Android Honeycomb is designed with larger screened, high performance devices. Many people agree that devices that run on the last few iterations of Android, are basically operating systems with phones in mind.

Stay tuned tomorrow where we hope to have hands on review time with the Motorola Xoom and Blackberry Playbook.
[cincopa A4DAka6UcOew]