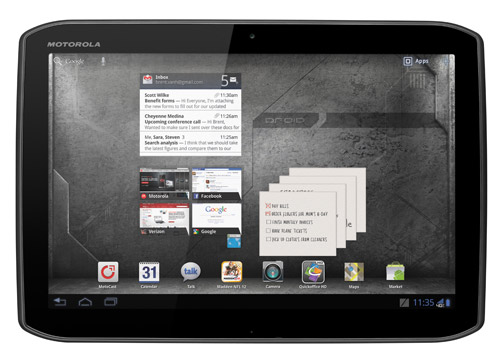 The total sales of Android tablet for the year 2011 have been recorded to be 10.5 million units. However, Motorola’s contribution to that figure has been a dismal 1 million units, the company’s quarterly earnings report indicated. The report further revealed 200 thousand units of the 1 million to have been sold in the last quarter of 2011.

However, on an optimistic note, Motorola is all set to make available its next gen tablet device, the Xyboard soon. Motorola has intimated the same to its existing customers via email. This would be a continuation of the company’s XOOM line of tablets. Interested people would be able to place their order for the 10.1 inch version of the Xyboard that has been priced at $600 for the 32 GB model and $500 for the 16 GB model. There is the 8.2 inch version of the tablet also available for order that costs $500 for the 32 GB and $400 for the 16 GB model. Orders can be placed at the company’s website.

One feature of the Xyboard tablet that is worth a mention is its display screen which offers a wider viewing angle and boasts of a resolution of 1280 x 800 pixels. Both the Xyboard models is based on a 1.2 GHz TI OMAP processor with Android 3.2 Honeycomb as the OS. If the latter bit is disappointing, Motorola has stated the Android 4.0 ICS upgrade would be made available very soon.

Other features of the Xyboard include a dual camera setup where a 1.2 megapixel unit does duty at the front while at the rear lies a 5 megapixel camera.

Motorola has been the first to come up with the XOOM tablet running the tablet centric Android 3.2 Honeycomb though it never really got off to a start as far as its sales is concerned.

If one orders for the sets through the Motorola site then there is the offer of free shipping of the goods that is on right now. Maybe it should have been a bit more competitive on the pricing front with the new Xyboard to ensure they put up some decent sales figures.