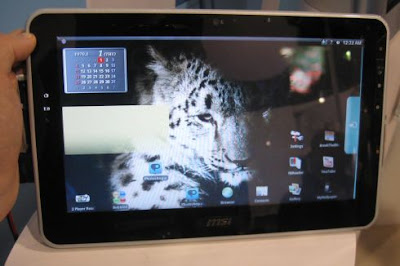 Here is one more manufacturer who has decided to shun Windows 7 in favor of the Android OS. MSI has revealed ambitious tablet plans and announced they would be offering tablets with both the Android and the Windows 7 as the OS. However, the latest move on part of MSI might disappoint those who were awaiting the Windows 7 laced tablet hoping to catch a near desktop experience in a tablet environment.

However, the good thing about this entire episode is that the move will prove beneficial in the end since MSI‘s delay is on account of integrating the much more efficient Intel Oak Trail platform, which is slated to make its debut in the first half of next year and is expected to take processor performance to an entirely new level. So much that it will shred to pieces the usual notion of the Intel/Windows combo being cruel on the battery. An ARM-based chip together with Android, on the other hand, is a lot less demanding on battery resources.

As for the Android tablet, MSI has said they are on track to bring out the WindPad 110 tablet before 2010 comes to a close and will be built around the ARM-based dual-core NVIDIA Tegra 250 chipset. In fact, to further enhance user experience with the WindPad, MSI is reported to be in the process of setting up a mobile app store exclusive to the WindPad. They are collaborating with Google in giving final shape to the App Store, though it isn’t clear if users will still have access to the Android’s official Android Market or only to the MSI app store or both.

In any case, the tablet will be one more to watch out for in the coming days.