You are here: Home / e-Reader Reviews / MSI Windpad 100A Review from Computex 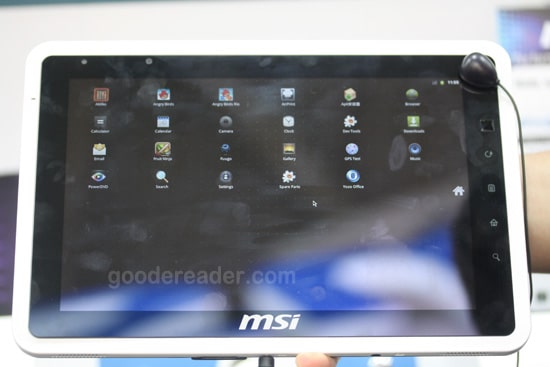 When we were in Taipei, Taiwan last week for Computex,, MSI had 3 different tablets at their booth, such as the 120A! Today we take a look at the MSI Windpad 100A and see how it stacks up.

The Windpad 100A gives you a 2.3 Google Android experience, which is ok by 2010 standards, but with all of the Honeycomb tablets coming out this is hurting. The Nvidia Tegra 2 processor and the fact it has a 10.1 inch screen with a resolution of 1280 x 800 pixels with an IPS display helps. It has a rear facing 5 MP camera and a front facing 2 MP edition for video conferencing. You will have around 16/32 GB of internal memory and can further enhance it via Micro SD. It has WIFI for browsing the internet and has 1 GB of RAM. It has 2 USB ports, HDMI, docking port, and headphone jack.

The model we saw at Computex had a SIM card slot so you will be able to upgrade to 3G. No idea on vendors or what frequency the 3G runs at. There was also no word on price or release date but MSI is notorious for showing tablets off at tradeshows and never releasing them.