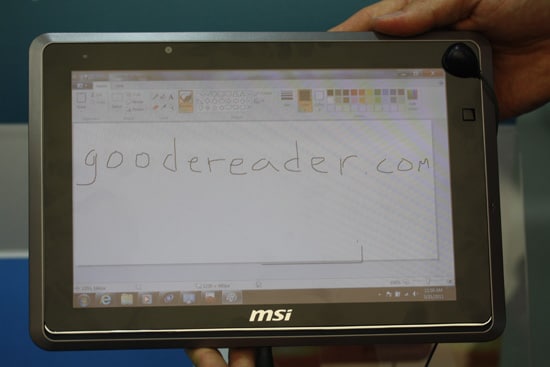 MSI at Computex was showing off a new model to its Windpad series with a new entrant in the Windows 7 Slate market with the new MSI Windpad 120W.

The Windpad features a 10.1 inch capacitive color touchscreen with a resolution of 1280 x 800 pixels. It has 2 GB of RAM and a 32 GB Solid State Drive to store your data. One of the big hyping factors on this new tablet was the fact that it was running on a AMD Z-01 1 GHZ processor and the new Intel Atom Cedar chip-set. The Tablet also has surround sound speakers, HDMI and USB outputs and WiDi/HSPA wireless connectivity.

The tablet was running Windows 7 64 Bit and seemed fairly responsive to our tests. It did have a unique MSI GUI that had added touch screen functionality.