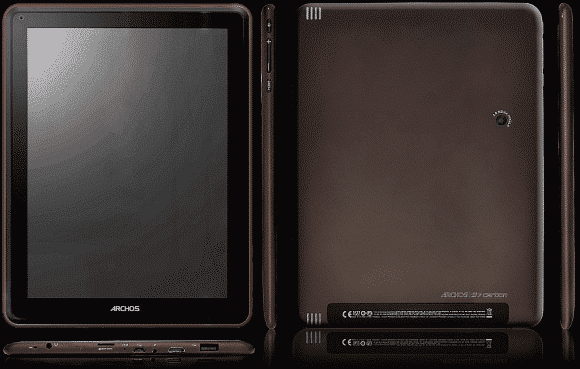 Archos has a new line of entry level tablet devices up its sleeve, the first of which has just been revealed. Named 97 Carbon, the tablet comes with a 9.7 inch 1024 x 768 pixel IPS display and has an aluminum finish, weighing 21.8 ounces with a thickness of just 0.45 inch.

Other aspects of the 97 Carbon include a 1.2 GHZ chip, 1 GB RAM, and 16 GB of internal memory. The tablet runs Android 4.0 ICS and is capable of playing 1080p video. Other additional features of the tablet worth mentioning include a microSD card slot, 0.3 megapixel and 2 megapixel camera along the front and rear, full sized USB port, and a HDMI port.

One of the most exciting elements of this new device is access to the Google Play store, a break from the usual tradition at Archos. Most of their previous generation tablets only had access to the Archos App store. The tablet comes pre-loaded with the Office Suite Viewer, News Republic, Brief Me, and Angry Birds, among others. There is also a demo version of World of Goo pre-loaded into it.

The Archos 97 Carbon tablet forms part of the Element series from Archos, which comprises of a 7 and a 8 inch model, both of which are expected soon. As for 97 Carbon, the tablet will sport a price tag of $250 with an official launch taking place sometime in July.