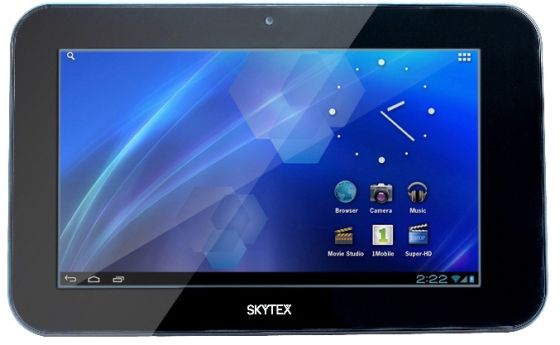 Skytex SkyPad Gemini and the Skypad Protos are the newest budget tablets that Skytex plans to introduce this summer. The SkyPad Gemini with a 7 inch 800 x 480 pixel display will be priced $179, while the SkyPad Protos will have a 9.7 inch 1024 x 768 pixel display sporting a price tag of $279.

Both the tablets share quite a similar spec sheet: 1.2 GHz ARM Cortex-A8 CPU and Mali 400 graphics along with a RAM strength of 1 GB and 8 GB of storage (microSHC card slot to allow for more storage). Also, both the tablets run Android 4.0 ICS.

Other common aspects for the two tablet devices include a mini USB port, HDMI 1.4 output, Wi-Fi and Bluetooth 2.0 functionality, along with a 3.5mm headphone jack. However, the two tablets differ on battery credentials, with the Skypad Gemini being powered by a 3000mAh battery that the company claims will be good for 6 hours. Similarly, Skypad Protos gets its juice from a 6000mAh battery pack which allows for a runtime of 10 hours.

Another unique aspect of the Skypad Protos is that it boasts of a 4:3 aspect ratio display which makes it better suited for ebook reading rather than watching movies. However, the downside of such a setup is that there aren’t too many apps that support that aspect ratio. Also, while on apps, neither Skypad Gemini or Protos will have access to the official Google PlayStore. Instead, users will have the 1Mobile Marketplace, though there shouldn’t be any dearth of apps to run on the tablet. For instance, there are plenty of interesting apps to be sourced from the Good e-Reader App Store as well.