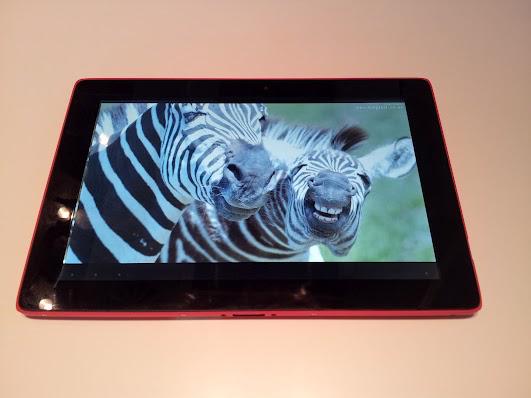 So far Intel only has a minuscule presence in the tablet segment, something that belies its otherwise formidable presence in other forms of computing. Arch-Rival ARM seems to dominate the current market, but this might change soon now that the chipmaker has come up with the Medfield chipset. The new chips promise better battery backup times while also offering superior performance, both of which are often considered to be Intel’s weak sides and have been preventing it from being a big time player in the tablet world. Also, Sharp has decided to put the Medfield chipset to use in its latest tablet.

Running Android 4.0 ICS as of now, the tablet is designed for use by the student community. Specs are decent at best; 10.1 inch 1280 x 800 pixel six point multi touch display, 32 GB internal memory, and an 8 megapixel shooter at the tablet’s rear along with a VGA unit at the front. However, one of the biggest pluses with the tablet is its battery life, which at 12 hours does make the tablet stand head and neck above the majority of tablets currently available. Sharp has also stated that the tablet will be able to run Windows 8 once that becomes available. Other interesting optional features the tablet offers include a “bio metric sensor, wireless charging, pen input, and a RFID based alarm system.”

The price is what consumers are eager to know, but at this point no hint is available.