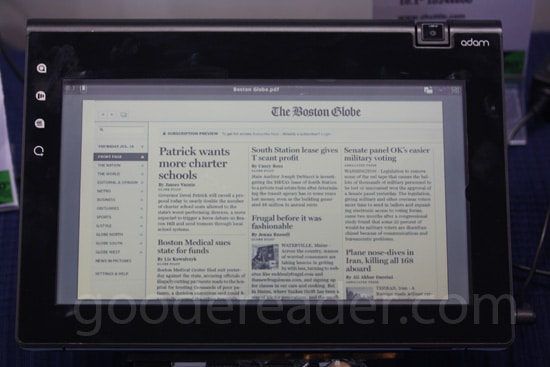 Today we broke the news that the Notion Ink Adam 2 is in development and should be ready by December of this year. CEO of Notion Ink Rohan Shravan said that the company will debut the unit at CES 2012 in Las Vegas, which we will be attending. Earlier in the month we were in Taipei Taiwan for Computex 2011 and landed an exclusive interview with Pixel QI CEO Mary Lou Jepsen. She told us that they had developed a next gen screen for the Notion Ink Adam and had a display model showing it off. It seems as though this new screen will be the one the Notion Ink Adam 2 uses and not for the Adam 1.

The big problem with the existing screen in the Notion Ink Adam employs with the Pixel QI technology is two fold. Not only do the colors look washed out, but it does a poor job in the direct sunlight. This defeats the entire premise of using Pixel QI screen technology, whose essence is performing well in the light.  The new screen that the Adam 2 is going to use employs better film that cuts down on screen glare and does a better job on the Adam. This was the huge concern with the Adam in general that it almost had dual screens which made for a lackluster experience.

We have also heard some rumors out of the Notion Ink camp today! A source within the company told us that the Adam will be using the new Nvidia Tegra 3 processor! When we were at Computex we met with 2 senior Nvidia representatives who gave us a technical demonstration of the prototype Nvidia Tegra 3 quad core processor. This unit was amazing featuring 12 GPU cores! The resolution for this new processor does take it to the next level with 1440p! This is two times 720p and is 1.5X better then the latest 1080p. Not only will this new Nvidia Tegra 3 processor be able to handle superior resolution, but the lead engineer told us that it easily handles 3D. In general, 3D requires double the frame rate (120 frames per second) and double the pixels.

The same source told us a few other tantalizing tidbits! We heard that the Adam will ship with Google Android Honeycomb 3.2 as the operating system of choice, allowing the Adam to enter 2012 with a relevant operating system. Finally we heard the company was considering 2 rear facing cameras to shoot video in 3D ala the LG G-Slate.It will also have the same front facing camera that we see in the current iteration of the Adam.

One of the biggest problems with the Adam so far was the shipping and delivery system with the initial launch of the device earlier this year. Many customers cannot simply buy the device but have to jump through various hoops of pre-order rounds.The Adam 1 came onto the scene with lots of viral hype but it had sparse availability which hurt their sales and negative reviews  made people switch to other devices. It also shipped with an older version of Google Android 2.2 and the road to even 2.3 has been a long one.

I am firmly excited at the Adam 2 having all of these features in the next build, the Adam 1 was great and we reviewed it extensively. The big changes with the new display technology should go a long way with making a large screen tablet have bright and vibrant screen resolution and will be 50% better then the current iteration of the Adam in Pixel QI mode. I am also pleased that the company decided to go with a better processor in order to be relevant during the long term. If the rumors on the 3D camera are to be true, this will mean that the Adam will be the highest performing 3D Tablet on the market. I do hope that with the added investor capital they got recently, paired with the manufacturing connections,  will allow the Adam 2 to enjoy higher volumes and shipped quickly.