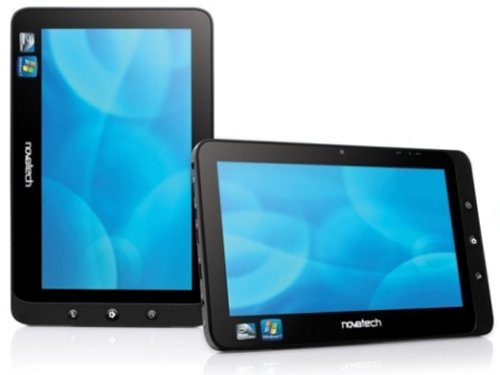 This new tablet successfully unites the two warring factions of Google’s Android and Microsoft’s Windows 7 (you might argue that these two are not exactly at war, they are competitors nonetheless). The Novatech nTablet’s dual nature isn’t just restricted to its ability to load two different operating systems, but it also shares its looks with two distinct tablet PCs – the ViewSonic Viewpad 100 and the Tegatech Tega v2. However, the duality of the Novatech nTablet doesn’t come cheap, with a price tag that starts at £349.99 in the UK, which becomes $552 on the other side of the Atlantic in the US. This isn’t exactly what you call cheap, but in comparison to, say, the Tega v2 – which starts from $799 – it isn’t so bad. Unfortunately, the base price of the nTablet does not include any operating system and once that comes into the pictures, the price starts its northward journey. So an nTablet laced with Windows 7 Home Premium is priced at £439 or about $693 US while the same is even higher at £469 or $740 US for Windows 7 Pro.

Now for the nTablet’s specifications: the Novatech offering climbs to notebook territory with a 1.66GHz Intel Atom N455 processor along with 1GB of DDR3 memory. The 10.1 inch of capacitive multitouch display has a resolution of 1024 x 600 pixels while storage inside stands at 32 GB SSD. The nTablet also has 2 USB ports, a 1.3MP camera, 802.11b/g/n WiFi, along with 4200mAh battery. The nTablet tips the scales at 1.6 pounds. However, all of that couldn’t prevent the nTablet from being a bit sluggish when multitasking in Windows 7.