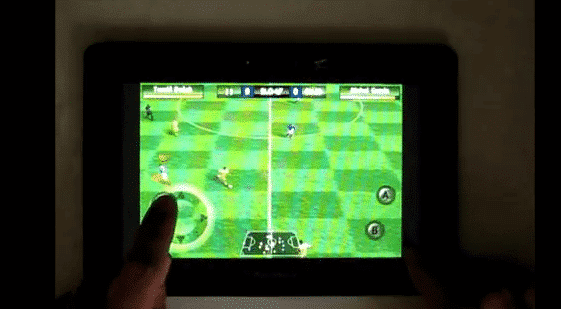 RIM has allowed the PlayBook to run some Android apps via an official software update as a desperate measure of ensuring the tablet continues to stay relevant. However, a developer by the name “Bubble Warp” has taken things to a new height by devising a hack which they claim will enable the PlayBook to run iOS apps as well. This has been made possible after rewriting some codes on some specific apps, thereby creating an environment for them to run on a device that is not running the Apple iOS.

The gaming apps such as Monkey Ball, Tiny Tower, TomTom navigator, and Sushi Cat seem to perform without much fuss, though the fact that the iOS hasn’t been designed to run on tablet PCs with a resolution of 1024 x 600 pixels does cause a lack of visual clarity. Sometimes, for example, black bars would crop up along the sides of the screen.

However, before every PlayBook user starts believing this is the beginning of an exciting phase with iOS apps available on the PlayBook, there is a chance that the companies that produce the applications will pursue a legal tangle with Apple. Especially given the zeal with which the Connecticut based company is pursuing a host of legal cases against its competitors right now.

Of course, RIM won’t be allowing this to happen officially. It has already stated it is not going all out with the efforts to open up entirely to the Google Play Store.

As Alec Saunders, vice president of developer relations at RIM, puts it, “Piracy was a huge problem for Android developers and RIM doesn’t want to duplicate the chaotic cesspool of Android market. Following that, we could see the slowdown in the progress to bring in entire Google Play (Android Market) Store the tablet.”

An official tie up with Apple is an extremely unlikely scenario, since there is a huge difference in the screen resolution of the iPad and the PlayBook.

This video covers the story.