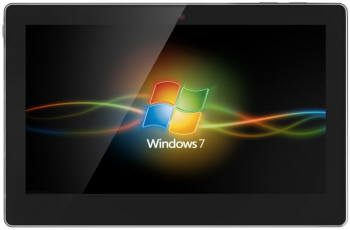 A tablet running Windows 7 and based on Intel’s latest Oak Trail platform has popped up in the Korean tablet landscape. With quite a few Windows tablets already to its credit, the OSC9 is the latest from the Korean company Ocosmos. In fact, Ocosmos had the tablet up for display as early as January 2011 at the CES though might have been waiting for Intel to officially launch the Oak Trail chipset to go ahead with its tablet launch plans. Now that the new Intel chips have been launched, what we might get to see next is the official launch of the OSC9 in Korea as well as the world over.

As for the tablet’s specifications, the 1.5 GHz Intel Atom Z670 Oak Trail processor is mated to a 2 GB RAM while storage comes in the option of either a 32 GB or 64 GB solid state disk. The OSC9 further comes equipped with a 1.3 megapixel and 5 megapixel camera at the front and the back. The tablet also features a 6-axis gyroscopic sensor and boasts of Wi-Fi by default though for added 3G or 4G functionality, one will have to depend on an external dongle.

However, if the 10.1 inch capacitive touchscreen display that the OSC9 comes with is too big, there is also a smaller tablet in the making that will have a 5 inch display.

Launch details of either the OSC9 or the upcoming 5 inch sized tablet is still kept in wraps. So is the price that the tablet will cost once it becomes available.