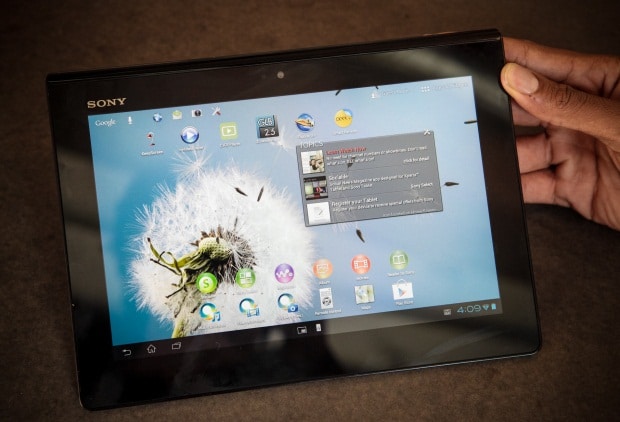 Another Android tablet has hit the market hoping to wear the crown as the ultimate gadget to have: the Sony Xperia Tablet S. Interestingly, Sony isn’t gunning for the iPad with its second gen Tablet S, but has set its sights on Samsung and wants to seem just as popular as the South Korean company is with its Galaxy Tab range of devices. However, does Sony have what it takes to make it to the top of the Android tablet heap? Let’s find out.

Looks wise, the new Xperia Tablet S continues with the same design as its predecessor, though in a much more refined form. Thin and light qualities are in, and the new Tablet S is much more sleek and stylish. While the first gen Tablet S presented a curved edge along one side that resembled a closed magazine, the new Tablet S retains the same though in a more subtle manner. Also, with the curved rear section featuring a raised dot pattern, holding the device with one hand is a lot easier and more secure. Compared to the Transformer Pad 300, the new Tablet S is smaller and lighter, though a bit thicker. Overall, the tablet is quite a looker, which is enhanced further with its black and silver color scheme. Unfortunately, the thick bezel does somewhat interrupt the flow of the design. 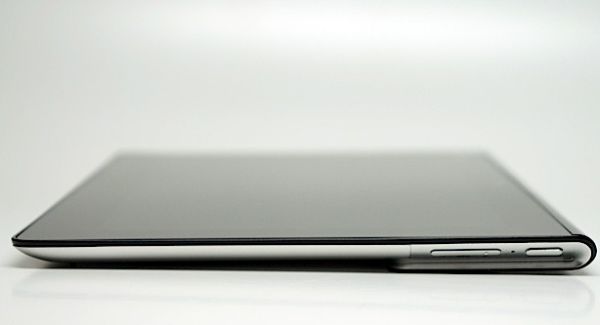 The new Xperia Tablet S carries the same 9.4 inch display having a rather sedate pixel strength of 1280 x 800. This does pale in the face of 1920 x 1200 pixels that top of the line Android tablets, like the TF700, has to offer, not to mention the class leading 2048 x 1536 pixels of the iPad 3. Sony should have really done something here, though for the average users who aren’t too concerned with the number of pixels, the display is enthralling with deep, rich blacks and equally vivid colors. Display angles are great with not much loss of color or distortion when viewed even from extreme angles. Another great aspect of the display is the screen’s tendency to not pick up fingerprint smudges. This is great and makes the device look fresh and inviting even after extended periods of use. The casual users won’t have much to complain about the display if they can get past the fact that the tablet has last year’s resolution.

Powering the device is a 1.3-GHz Nvidia Tegra 3 quad core processor, which works in conjunction with 1 GB RAM. The newest Tegra 3 chip has already proved its worth and the Tablet S impresses with its zippy performance. That said, waking up the screen can be painfully slow at times, though that issue could be more related to software than hardware. There is some stuttering during normal operation, and rotating the display from landscape to portrait mode also took about a second or two. Overall, apart from a few hiccups, the Tablet S performance is not too serious of an issue.

On-board storage options include 16, 32, and 64 GB while there also is a full size SD card to allow for more storage requirements. What is also nice is that the SD card slot has a cover attached to it which makes it splash proof. Other ports the tablet offers include a headphone jack on the left edge and the charging port at the tablet’s rear, which also serves as the tablet’s dock connector. The dock connector has a cover as well, but the fact that it is completely removable makes it prone to being misplaced.

There is a set of speakers at the rear bottom and they do a really decent job with music, watching movies, or playing games.

Those who might have expected Jelly bean will be disappointed. The Xperia Tablet S comes with Android ICS out of the box, though the transition to Jelly Bean shouldn’t be too far away. Sony has added its own layer of customization, but in the most non-obtrusive manner. What this means is that there are no icons changed, no color schemes altered, and so on. A nice addition here is the Small Apps tapping which will launch a series of small pop up widgets and functions that will be displayed at the top of the screen.

Guest Mode is another smart addition to the Xperia Tablet S which is much like the Guest User account in Windows. There can be several ‘Guest Mode’ accounts created and logging in as one will allow the user to enjoy many of the tablet’s features, but not all. It’s a nice addition and besides its intended usage (allowing others to use the device without worrying about your personal files) Guest Mode can also be used to restrict kids to using only the aspects of the device that their parents consider suitable. The feature is also easy to use and could well be made a core part of Android features. 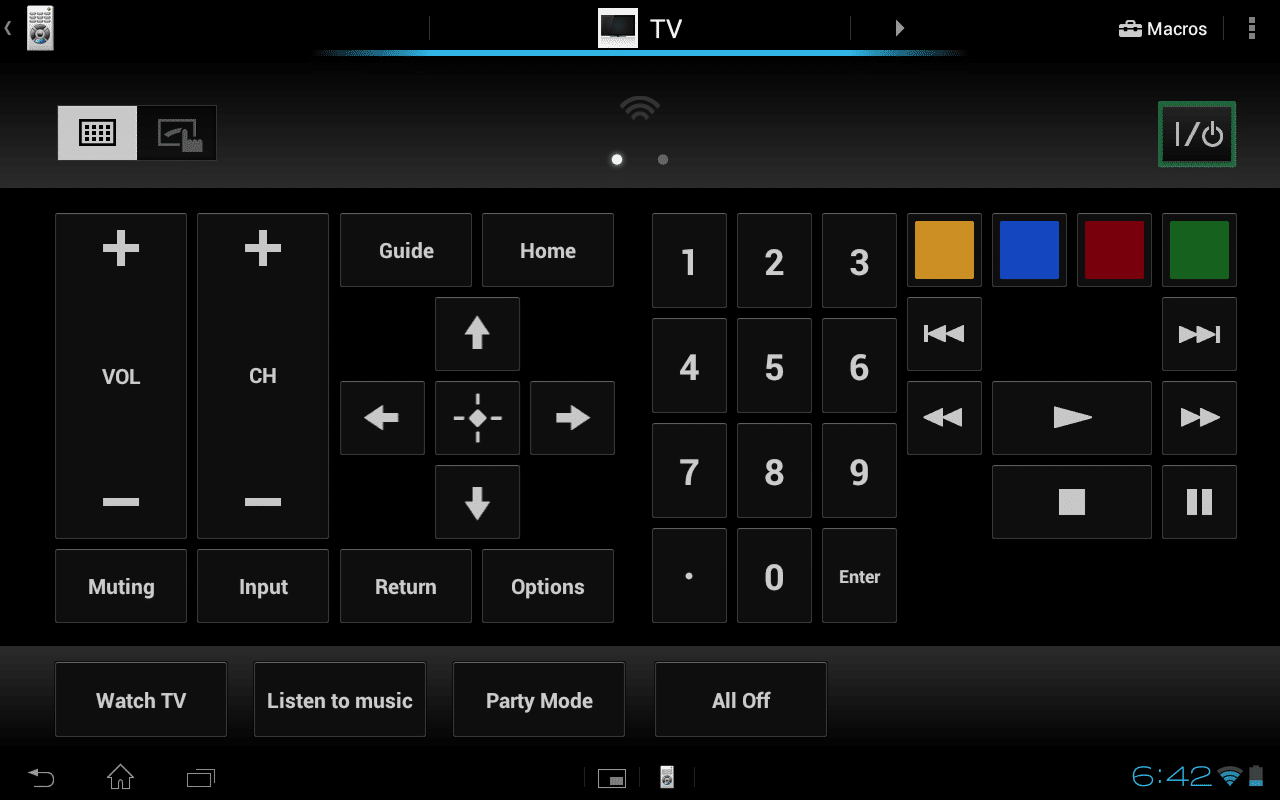 The Remote app can be considered the best development that Sony has brought with the Xperia Tablet S. For one, it’s remarkably easy to use and very effective with a variety of devices. Not surprisingly, Sony’s years of experience in dealing with consumer electronics has come in handy here and the Remote app can be used to communicate with almost any device. A unique aspect of the app is you can program macros, which can be used to save a series of tasks (or rather taps) and can be initiated with a single initial tap. However, for such an impressive app, the macros just remember a series of taps but do not improvise on them. They will be useless in a changed scenario and will only perform as they are programmed.

These apart, the Tablet S also plays host to Sony offerings such as Music Unlimited, Video Unlimited, Play Memories Online, Reader, Walkman, and Socialife. Among the other apps loaded in the device, we found Evernote, OfficeSuite, Hulu Plus, Zinio, Netflix, Scrapbook, and so on. There are quite a few apps pre-installed on the device, though not all of them are required.

The overall software experience isn’t too impressive, which does leave a sour taste with the device which otherwise boasts of superb hardware. The Nexus 7 performs noticeably better thanks to Jelly Bean. 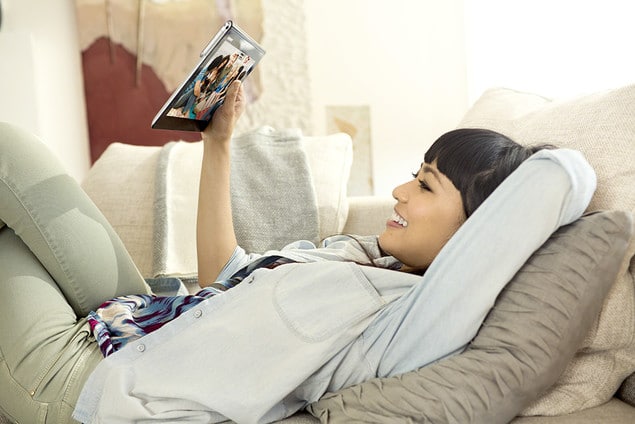 The Xperia Tablet S continues with the folded magazine design, making it quite easy to hold with one hand for reading. Weighing in at 1.3 pounds, same as the iPad, the latest Sony tablet is also quite light. That makes the new Sony tablet your perfect companion to indulge in some serious reading. The Sony Reader should also be enough to satiate your content requirements, though there also is the Amazon, Kobo or Barnes & Noble reading apps the user can opt into. The wide viewing angles also mean ebooks will be perfectly discernible even from odd angles.

A 9 – 10 hours of backup time is what the Xperia Tablet S with its 6,000mAh battery seems to be capable of, which can be considered quite decent. 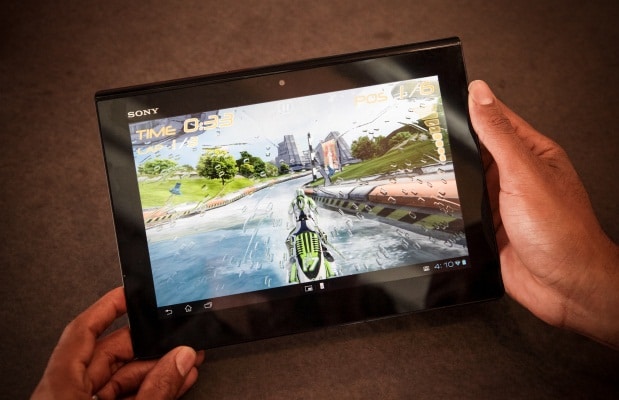 The original Tablet S was an impressive device, but was marred by a not too friendly price tag along with a few other quirks. The Xperia Tablet S is without many of the irritants of the original and while it still can’t be considered the best example of the perfect tablet, it still makes a strong case for itself with the asking price of $399. That said, the Samsung Galaxy Tab 2 10.1 does seem to have an edge with its better battery times and a better sound output. Further, if a bigger display is not a strict requirement, the smaller 7 inch Nexus 7 can be a great alternative with a better display, better performance (thanks to Jelly Bean), and better pricing. Then there is the ASUS Transformer Pad TF300, which is cheaper at $380 without the keypad dock.