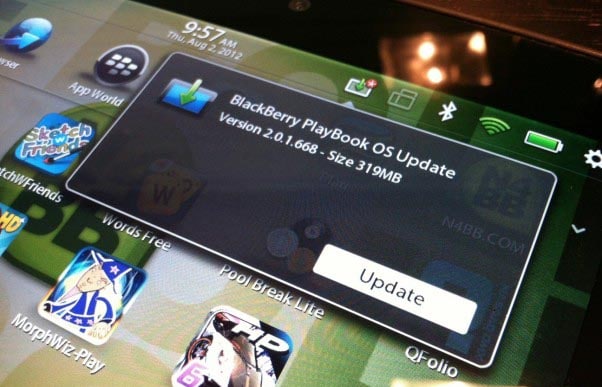 If you were hoping to download the latest update for the Blackberry Playbook, prepare to be let down. We have breaking news that Research and Motion has pulled the update from being pushed out to people who have yet to upgrade to the latest RIM 2.0.1.668 update.

There is no official word from RIM with regards to pulling the update. Since it launched, there have been a few users that reported problems when they sideloaded their own Android apps. In some cases, apps are disappearing from the homescreen and suddenly stop working. The fix right now is to simply delete the app and reinstall it. This might cause some problems if you have saved games, because they will disappear. Other problems resulted in some Playbook Wi-Fi tablets unable to boot up the upgrade.

The majority of users who installed the latest firmware update had overwhelming positive things to say about it. In many cases web browsing is quicker, it boots up faster and has a added functionality for BAR files. It also gives you better access to wireless networks in the home with enhanced upgrades.

When the Playbook OS 2.0.1.668 update rolled out a few days ago, many people cheered. It seems that the date on the upgrade was from June 16th, which should have given the company ample time to test everything internally. Now everyone is collectively moaning in despair that they did not get the update in time. There is no current option to downgrade your operating system unless you get an image from one that has not been upgraded yet.

RIM has contacted us and has made the following statement. “RIM discovered an issue with the PlayBook software 2.0.1.668 update. The update has been removed. Customers that have already successfully updated to version 2.0.1.668 are not affected and can continue using their PlayBook with the updated software.”